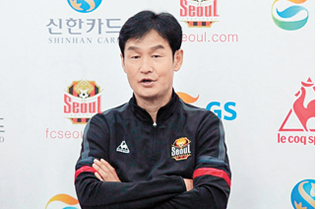 FC Seoul, six-time league champions, is in the lower group in Korea’s top pro football league’s split system for the first time. Since 2012, the K League 1 has been running under the split system and currently 12 teams are divided into two groups after playing 33 matches. The teams then play additional five matches within their groups.

“This isn’t the FC Seoul that we used to know,” Choi said at a press conference at Seoul’s clubhouse in Guri, Gyeonggi, just outside of Seoul. “I think I’ve returned to this team amid the worst situation.”

Choi rejoined Seoul on Oct. 11 as part of efforts to help the six-time K League champions break out a slump. He left for Chinese side Jiangsu Suning in 2016 after leading Seoul for nearly six seasons. Following a season-long stint with Jiangsu, the 45-year-old worked as a commentator for local broadcaster SBS.

“Considering all the support I’ve received from Seoul, I need to achieve a breakthrough for this team as soon as possible,” he said. “I have no regrets returning to Seoul. I will push the players as hard as I can to put this team back on the top.”

Under Choi’s watch, Seoul did not miss an Asian Football Confederation (AFC) Champions League appearance. Seoul was runner-up at the top continental club tournament in 2013 and Choi won the AFC Coach of the Year award that year. He also led Seoul to win the league in 2012 and claim the Korea Football Association Cup title in 2015.

Choi’s Seoul return started badly as his team fell 1-0 to Jeju United on the road last Saturday. But for his first home match against Gangwon FC today, Choi said his side is determined to collect a win.

“I’ve never imagined before that Seoul would play in the lower group under the split system,” he said. “The remaining five matches are all important for us. We must not give up goals easily.”

Choi said that since his return to the job, he has emphasized communication and confidence in dealing with the players.

“Our players were heavily pressured after the team failed to collect a win in last 10 matches,” he said. “They lacked communication and confidence, so I told them not to be afraid of making mistakes and play aggressively.”

Choi, a former striker who represented Korea at the 1998 and 2002 World Cups, said he believes that the players will rebound to end the season on a positive note.

“Each player has his own talent, and if I can help the players to use their best skills, we’ll be fine,” he said. “I will be emphasizing how desperate we are and our desire for a win. We want to show fans that we can get out of this situation with our own feet.”

When asked about team’s veteran striker Park Chu-young, Choi said he still trusts the former Arsenal and AS Monaco man. Park was rumored to be unhappy with the team this season. The 33-year-old only has one goal in 15 matches.

“He is my player and it doesn’t matter what he said or how he behaved in the past,” Choi said. “Park has had a good career and there must be a reason for that.”