GiGA Genie can change the channel, or just chat

GiGA Genie can change the channel, or just chat 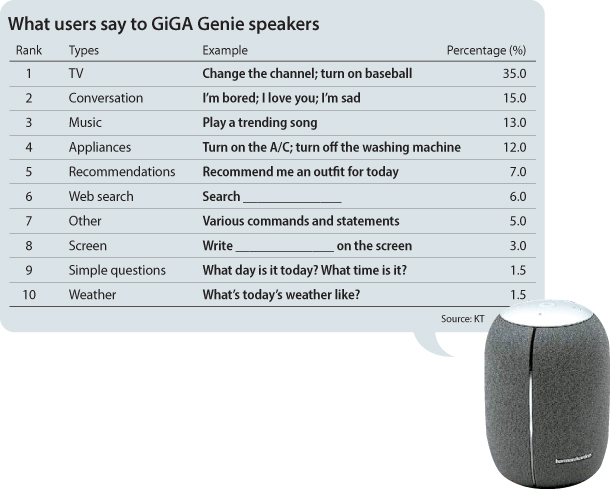 Koreans use their smart speakers to change the TV channel and talk about their feelings.

The JoongAng Ilbo recently acquired a list of the most popular commands made to KT’s GiGA Genie speakers. The telecom company analyzed commands made by users from when the speaker launched in January 2017 to Oct. 18 this year.

The most popular commands, at 35 percent, were related to TVs - turning it on or off and changing the channels.

After TV commands, things get a bit more unusual. Fifteen percent of the things said to GiGA Genie speakers are not instructions at all, but what appear to be attempts at conversation. “I’m bored” and “I’m sad” both appear on the list.

Some 13 percent of commands were about finding or playing songs, while another 12 percent were asking Genie to control Internet of Things-enabled home appliances like air conditioners and laundry machines.

Commands asking for recommendations took fifth place and web search requests took sixth. Other common commands include asking for basic information on the weather or time.

With accumulated sales of 900,000 speakers by the first half of 2018, KT is currently leading the domestic smart speaker market.

SK Telecom’s launch of Nugu in September 2016 kicked off a smart speaker frenzy among Korea’s large tech companies including Naver and Kakao. Competition between the country’s top three mobile operators - SK, KT and LG U+ - is especially fierce. All having launched their own brand of speakers, the three firms are trying to win over consumers by offering huge discounts for those who subscribe to their phone plans.

Among domestic operators, KT became the first to develop English-speaking smart speakers specifically designed for use in hotels. These special Genie speakers are currently installed in the Novotel Ambassador Hotel & Residence in Dongdaemun in central Seoul. The mobile operator plans to install Genie in three more hotels by 2022.

KT made a separate analysis of popular commands made to artificial intelligence speakers in hotel rooms. Commands related to music were found to be the most popular at 32.5 percent. Conversation came in second at 18.6 percent. Commands abut lighting followed at 9.9 percent, while TV-related commands took fourth place at 8.9 percent.

Other popular commands included requests for amenities and wake-up calls as well as questions about the time or weather.