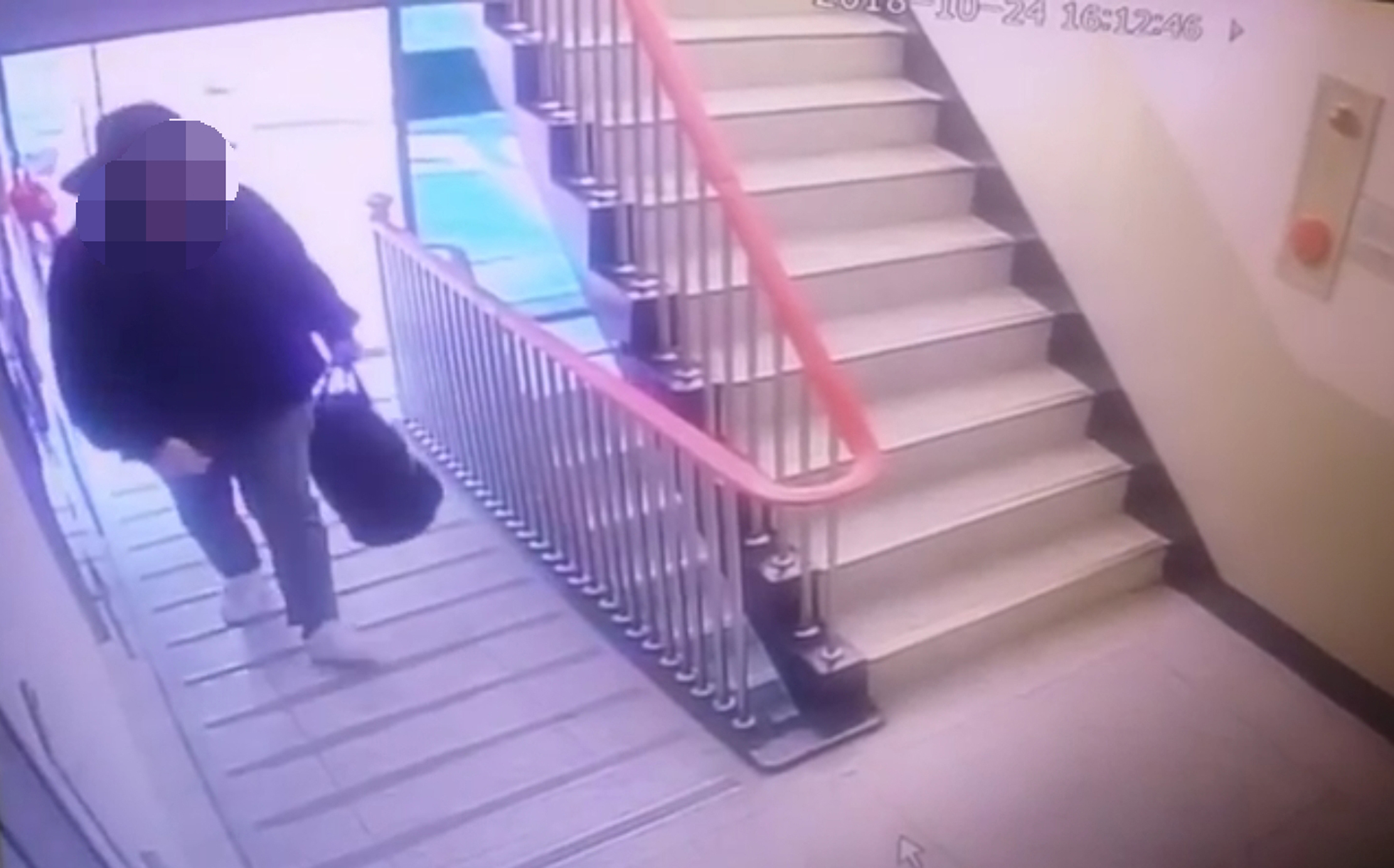 The 32 year-old suspect believed to have committed suicide after killing a family of four in their apartment in Busan captured by surveillance footage Wednesday, carrying a black bag containing many murder weapons. [BUSAN POLICE]

A family of four was found brutally murdered in their apartment in Busan on Thursday after a jilted boyfriend went on an eight-hour slaughter using up to 56 weapons.

The 32-year-old suspect’s body was also found with a plastic bag around his head.

On Thursday evening, a man called the Busan police saying he was unable to get in touch with his 84-year-old mother-in-law and the family she lived with. He wanted to take her to view fireworks over the weekend, but no one at her home was responding to his phone calls.

The son-in-law, accompanied by a police officer, went to the elderly woman’s home in an apartment building in Saha District around 10:30 p.m., where they found a gruesome murder scene.

The grandmother, her son, daughter-in-law and granddaughter were all dead, victims of a brutal killing spree by a young man once considered family.

The bodies of the three older victims were found stacked on top of one another inside a bathroom, covered with vinyl and a washing basin. The victims all looked like they were beaten or stabbed by blunt and sharp objects, police said.

The 32-year-old suspect, identified by only by his surname Shin, lay dead atop a bed in one of the rooms with his head covered with a plastic bag. Shin is believed to have committed suicide through self-asphyxiation, since a hose was attached to the bag that was connected to a small gas tank next to him.

The youngest victim, a 33-year-old woman identified by the surname Cho, was discovered in the living room with ligature marks on her neck. Her corpse was the most damaged, police say, apparently having also been brutally beaten and stabbed.

On Friday, Busan police said Shin was a former boyfriend of Cho, with whom he lived for around a month last autumn. Neighbors say the family introduced Shin to them at the time as their son-in-law. The couple later moved out of the family apartment to a studio apartment in Yangsan, South Gyeongsang, where they lived together until they broke up in August.

“It looks that Shin committed the act out of spite at the breakup,” said a police spokesman. “We will disclose the exact motives after further investigation.”

What is clear, according to police, is that the crime was premeditated and carefully planned, given the wide array of tools the suspect brought with him.

Police found a total of 56 tools inside a black duffel bag and strewn around the apartment, including blood-stained blunt and sharp weapons believed to have been used in the murders. They found an electroshock weapon akin to a Taser, which police believe was used by Shin to incapacitate his victims before killing them.

Surveillance footage from Wednesday afternoon showed Shin walking up the stairs at the entrance of the apartment building carrying the bag, sporting a hat and black sunglasses. His car was found parked near the building.

Police say Cho’s father, 65, was alone at home when Shin arrived at around 4 p.m. on Wednesday. Her mother, 57, and grandmother returned home around two hours later, and Cho came home six hours later around midnight. The police spokesman said Shin probably killed the victims one by one as they entered the home.

Shin may have had a card that allowed him access to the front entrance of the building, and was probably let into the home by Cho’s father.

It is also likely that Shin did not kill himself right after murdering the family, police said, since surveillance footage from around 9:50 a.m. on Thursday shows him going back to his car to retrieve the gas tank he apparently used to asphyxiate himself with.

Police started conducting an autopsy of the five bodies today, as well as a probe into the suspect and victims’ finances and backgrounds to better understand the potential reasons behind the crime.