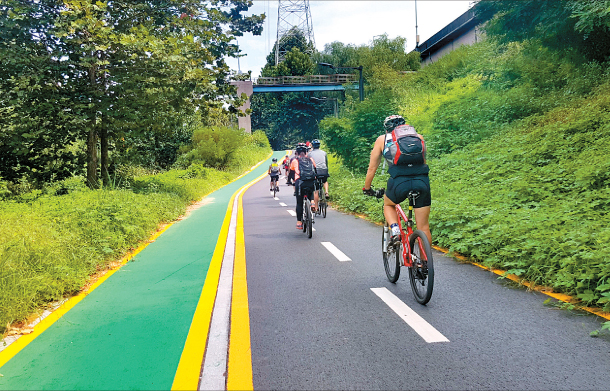 For the “NeoSapiens” generation, spending time with others in social clubs is becoming a must. With Koreans living long beyond retirement, and younger Koreans working only 52 hours a week, colleagues are no longer as important socially as in years past. A bicycle riding club gets together on the weekends to ride together along a scenic path. The bicyclers above are riding on a trail that connects Seoul to Pangyo. [KIM DONG-HO]

Since the Industrial Revolution, workplaces have dominated most people’s lives. In Korea this was certainly true: people spent their days in the workplace and spent most evenings socializing with co-workers.

Times are changing. In Korea, the workweek is now only 52 hours. Drinking with colleagues is becoming less compulsory.

And for the “NeoSapiens” generation — the generation that is expected to live to 100 or beyond — a career is going to end well before a person’s final days. That is increasing the need for social groups that will last a lifetime.

In Korea, alumni of Yonsei University, famous for eschewing group outings, have seen an increase in clubs formed by people in their fifties. The JoongAng Ilbo had the chance to spend time with one of this new generation of social groups.

Early in the morning on a warm day last August, men and women in their early fifties gathered at Suraksan station. All were wearing backpacks made for hiking, and sunglasses and hats. The members of this club were admitted into Yonsei University in the mid to late 1980s. Most members said that they did not have the chance to meet each other back in college days. On this day, every member greets each other as if they were long lost friends, even newly admitted members. This is a club rule: friendliness is a must.

When it is confirmed that everyone has arrived, the leader of the hike comes forward. Well-organized ranks are formed and they start the trek up the mountain. Most conversations are inquiries about each other’s life or about today’s hiking course. The group’s secretary is a woman who majored in musical composition and is well known for her meticulousness. Before the hike began, she rushed into a supermarket at the base of the mountain and emerged with two watermelons. She handed the watermelons to the leader of the hiking group, which calls itself “Santahoe.”

The course is rougher than expected. The club has opted for a harder scenic route rather than the easier courses. The route is too rigorous for some participants, who head down the mountain. The rest climb to the top, officially ending their two hour hike. Afterwards a well-organized picnic takes place with snacks prepared by members. After a final descent, the members find a restaurant near the subway station and spend the rest of the evening drinking and eating.

The hiking club dates back three years to Yonsei University’s 25th reunion for the class of 1990. To prepare for the reunion, representatives from each major got together to start planning. This led to the “Santahoe” club.

Student societies formed in the 1980s were very different from the clubs organized by the alumni today. Most student societies in the past were political: it was a time of constant protests against the military dictatorship. They had leaders and followers. Strict hierarchies developed. And students with different political values or beliefs didn’t get to know each other.

In today’s alumni communities, all the members come from the same place — the same school — and the relationships formed between members are horizontal. The executive committee positions are no longer a place of power, but purely volunteer. “As our life expectancy increases, more universities are creating alumni communities that are open to middle aged graduates,” said Byun Jae-duk, the chairman of the Korean University Public Relations Association. “Many diverse alumni communities have been organized since the 25th anniversary of matriculation.”

In Korea, the “586 generation” is the first generation to lead such groups. The 586 generation is a name given to people who were born in the 1960s, went to university in the 1980s and are currently in their fifties. (Thirty years ago they were called the 386 Generation because they were in their 30s and 386 was the name of a popular microprocessor in personal computers.)

The members of today’s 586 generation have attended university when higher education first started being universal in Korea. They are expected to live up to thirty years after retirement.

The generation before them didn’t have such an active alumni community activity except for the occasional encounter. In the case of Yonsei University, alumni groups focus on everything from riding bikes and climbing mountains to sharing knowledge. There is even a group for members who have lived abroad to come together and share their experiences with one other.

Japan’s society aged earlier than Korea’s. “As the society progressively starts to age the emphasis on relationships shifts from those formed while working to those formed whilst sharing a common interest,” wrote Japanese social critic Taichi Sakaiya in his book “Aging Society,” which was published 2003. Sakaiya predicted that social communities would be formed based on shared hobbies. The vertical relationships that form in companies make it difficult to keep in touch with former colleagues after retirement.

Social media helps bind members to each other. Through social networks, information is shared in an instant and used to organize meetings. One popular medium for sharing information between group members and initiating meetings is Naver Band. Unlike Kakaotalk, which prompts users to check messages frequently, users can check Naver Band whenever they want.

However, communities formed by the “586 generation” distant themselves from old bases for groups: regional ties, going to the same middle school, high school or college, or blood relations. Naver Band, the platform on which meetings are organized, has a set of rules that the members must follow. Members cannot make posting on certain kinds of subjects. “Posts pertaining to a certain ideology, political preference or religion as well as personal and external business are prohibited from discussion,” said the manager of a Yonsei alumni community.

As communication between members becomes easier with social media, alumni groups are no longer confined to people who were in the same year. In the case of the Yonsei University alumni bicycle meeting, a doctor who entered school in 1984 shares the chairmen position with someone who entered in 1986. In spring and autumn, people who entered school in the 1980s all got together to partake in a hiking event. Global ties are also strengthened. Participants in the group for people who have experience living abroad use social media to connect with members who still live in other nations. “Those who are currently living abroad have their own groups,” said the participant. “But they use Naver Band to get together when they come to Korea.”

The main thing is that older people have communities to share their weekends with either biking, hiking mountains, going golfing our playing tennis. The “Santahoe” club plans to visit the Youngnam Alps for a two day hiking retreat. Moreover, members frequent Naver Band to ask for advice about problems they have. Such personal relationships in later years were not common between former colleagues.