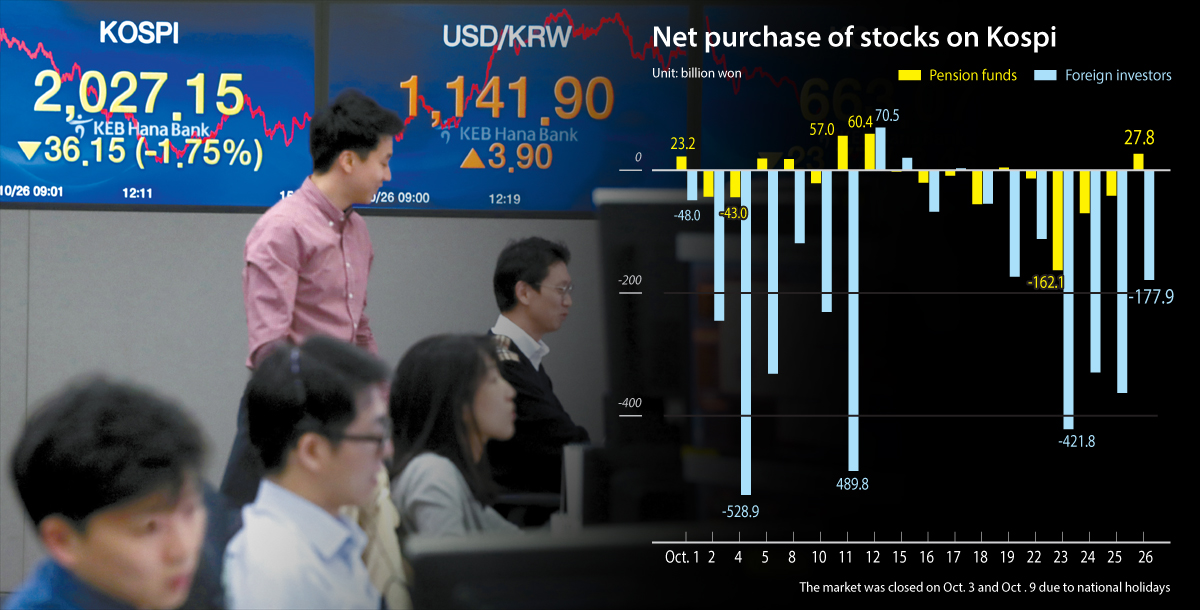 The electronic board at KEB Hana Bank in central Seoul on Friday shows the Kospi barely hanging on to the 2,000 mark as it closed at its lowest since Jan. 2 2017. [YONHAP]

Foreign investors have been the driving force behind the recent bearish rally that has hit benchmark Kospi over the last week, with the index falling to its lowest point in nearly two years.

The won has depreciated 2.8 percent against the greenback since the start of October, and since the beginning of the year it has devalued 7.4 percent.

Pension fund investors include not only the National Pension Service, but also other public funds such as the Government Employees Pension Service, the Military Personnel Pension and the Teachers Pension, as well as the Public Officials Benefit Association and the Korea Teachers’ Credit Union.

These funds traditionally protect the local stock market in times of crisis such as the global financial meltdown in 2008 and the European fiscal crisis in 2011. The pension funds generally shore up stocks when foreign and retail investors are busy selling off their shares in massive numbers.

But this time the government funds were the first to jump ship, most likely because they have recently been criticized for their low investment performance.

As of July, the National Pension Service’s (NPS) overall investment yield is at 1 percent. Especially, the yield on its investments in the local stock market has suffered a 6.11 percent loss.

The recent offloading of shares seems to be an effort to minimize the losses that they are suffering from investing in the bearish market.

The NPS, which manages a 643-trillion-won fund as of July, announced this year that it will be reducing its stake in the Korean stock market, which as of July accounted for 19.1 percent, to around 15 percent by 2023.

Even the Public Official Benefit Association, which is the only pension fund that is making more than 10 percent on its investment yield, said it has cut back on investments in the Korean market.

“We invested more than 18 percent of our total assets in the Korean stock market last year,” said Han Gyeong-ho, CEO of the Public Official Benefit Association last week. “As of September this year, we have reduced it to 14 percent and plan to further lower it next year.”

Market analysts say there’s not much that the Korean government can do with the current bearish market.

“We’re looking into a contingency plan, but other than monitoring foreign investors’ investment trends, there’s not much that the government can do,” said a government official who requested anonymity.

The biggest reason is because the recent decline in the Korean stock market is largely due to outside risks - intensifying trade conflict between the U.S. and China, the normalization of the monetary policies of other countries due to the U.S. Fed’s interest rate hikes and instabilities in emerging markets - which are factors that the Korean government has little or no control over.

Some analysts are against the government intervening in the market, even if it is through the pension fund investors.

“In the past, the government has intervened in the market by buying stocks through the stabilization fund or banning short selling, but this has only resulted in negative side effects,” said Nam Gil-nam, a researcher at the Korea Capital Market Institute. “We’re at a time when it’s not appropriate for the government to actively play a role in stopping the declining stock market.”

Sung Tae-yoon, a Yonsei University economics professor, says that the current situation also reflects the weakness of Korean businesses that are easily affected by the slightest change in the global economy.

“The forecast that the Korean economy is shrinking and that Korean companies’ profitability will be worsening is reflected in the stock market along with the external factors,” said Sung. “The government has to start thinking about how to improve the Korean economy and the macroeconomic situation.”