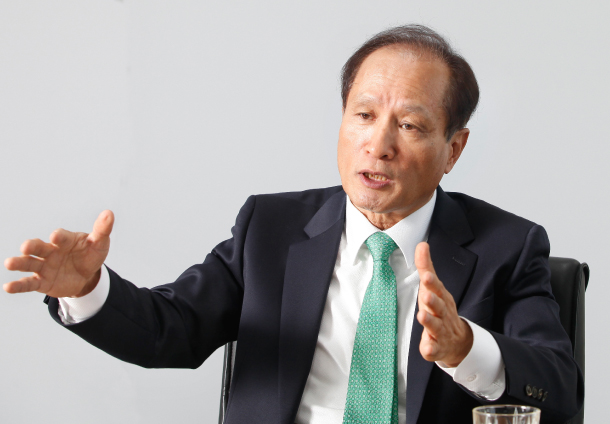 As relations between South and North Korea continue to improve, people are starting to picture how Pyongyang could change once foreign investment flows in.

Although that might still be a long way off, South Korea’s Foreign Investment Ombudsman Kim Sung-jin says he is already preparing for the time when he can play a role in solving difficulties for foreign firms trying to enter both Koreas.

“Foreign companies that enter North Korea will most likely be among the companies with experience doing business in South Korea,” Kim said during an interview with the Korea JoongAng Daily on Oct. 18 at the ombudsman office in the Korea Trade-Investment Promotion Agency in southern Seoul. “My vision as an ombudsman is to assure foreign investors and entrepreneurs that it’s safe to enter North Korea by creating a good business environment here in South Korea.”

An ombudsman’s major role is to help foreign companies and investors with any difficulties they have while doing business in Korea, ranging from things like visa trouble and education problems to business-related issues like conflicts with labor unions. The system was launched in 1999 after Korea went through a foreign exchange crisis in 1997.

Kim, newly appointed as ombudsman in August, trained to deal with foreign investors while serving as the head of the Public Procurement Service and as a deputy minister for international economic affairs at the Ministry of Economy and Finance.

“I have hands-on experience dealing with foreign investors… and also issues related to North Korea,” Kim said. “I hope to provide a good service to existing foreign companies in South Korea to open up doors for them to invest in North Korea as well.”

The following are excerpts from the interview with Kim.

A. The two Koreas are making progress to bring peace to the peninsula and as North Korea gradually opens up its economy there will be massive amounts of capital needed for economic development. But it will be difficult to lean on international organizations such as the International Monetary Fund for large investments from the beginning because of concerns about the risk will remain. A more realistic approach would be attracting investment from foreign companies that have established a successful business in South Korea.

You say experience in South Korea is very important. Do you think foreign companies are satisfied with the business environment here?

Well, it has only been about two months since I took this role, but I had a chance to meet with some of the chambers of commerce in Korea. They said they were a bit disappointed with the current administration for not putting much focus on foreign investment issues. I explained to them that there is some misunderstanding.

What is the biggest barrier?

It’s obviously the regulations. First, there are too many regulations and second, the regulations are vague. If a regulation forbids something, that something should be impossible to do without exceptions, but often that’s not the case here. This is a problem domestic companies are suffering from as well.

Before enacting a new regulation the National Assembly and the administration should put much effort into identifying whether it is absolutely necessary. Right now, lawmakers come up with numerous regulations each time an accident takes place. Later, those legislations end up choking companies.

How about labor issues?

That’s definitely another factor hindering foreign investment. There should be a clear line between management rights and labor rights, but that line is blurred here and foreign investors have trouble with that. There’s no problem with employees fighting for their wage or working conditions using their labor rights but other than that, it’s crossing the line. It’s nonsense if the management needs to get approval from the labor union for building another production line, for instance.

Are there any other problems?

I think there is still a xenophobic mentality in Korea. The question of “Who is us and who is them?” was addressed in the Harvard Business Review back in the 1990s. About three decades have passed since, but we still have to deal with the same question.

In today’s globalized society it’s meaningless to draw a line between domestic and foreign companies, especially when Korea is a small open economy depending on exports. What are the standards to distinguish the two anyways? What’s more important than where a company is headquartered is what kind of people it hires, how much tax it pays and how much it contributes to the regional economy.

But how about cases like Google? The company is blamed for not paying as much corporate taxes as local portal service providers like Naver and Kakao.

Well, on one side, our taxation system is lagging behind the rapid changes in the business environment. With new technologies and new type of businesses, our authorities need to come up with a more advanced taxation method.

We can’t criticize tech giants like Google just because they are earning a lot of money. They’ll ask what they have done wrong.

There seems to be a lot of complaints you need to handle. How do you handle them?

We first listen to their needs. Companies can contact us through our websites, phone calls and visits to our office. Once complaints are registered we send our so-called home doctors to examine the situation and see whether their complaints are reasonable. We have seven home doctors with expertise in different areas like accounting, law and tax affairs. If their request is reasonable, we talk with relevant parties like the local government, tax authorities and labor unions. The difficult part is persuading the parties to make changes to their stance or policies.

Some complaints take years to solve, while others take less time. Still, we solve about 400 complaints a year. I personally think it is a lot done in a year.

We’ve talked a lot about complaints. What are some positive factors of doing business in South Korea?

The quality workforce and high level of technology. Korea is considered a good test-bed market especially for tech companies. Also, considering there are several industries Korea has a strong presence in such as semiconductors, mobile and displays, there are chances for foreign companies to partner with leading players like Samsung Electronics and LG Display.

The Korean government is also very active in protecting copyrights, which are a favorable factor for those looking to build research and development centers in Korea.

South Korea can also become a bridge for investors with an interest in entering North Korea. Though it will take some time for inter-Korean businesses to resume, foreign investors can start investing in South Korea first then later enter North Korea together with the South’s companies by forming partnerships or joint ventures.