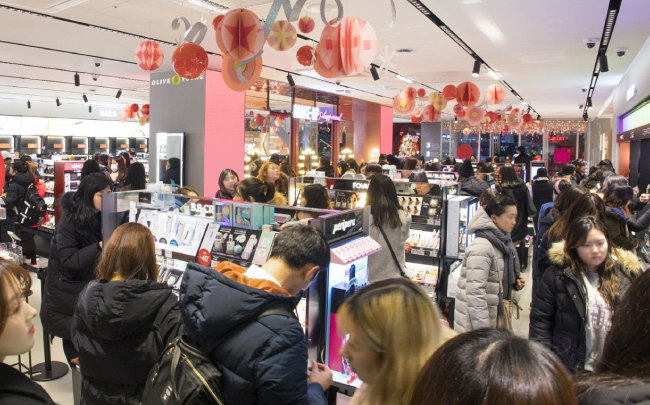 Olive Young’s flagship store in Gangnam, southern Seoul. The branch opened in September last year and has been visited by more than 5 million customers, according to the company. [OLIVE YOUNG]

Cosmetics brand Skinfood was one of the most recognized names in K-beauty around 2010. It once ranked as one of the top three best-selling brands in Korea and had a list of steady sellers that remain purveyors of must-have items today.

When the beauty brand announced earlier this month that is was filing for court receivership, the news shook the market. Many panicked customers shared lists on social media of Skinfood products they should stockpile at home before the inventory was depleted.

“I did feel that there were fewer new releases and a decrease in marketing activities this year - often times the stores seemed emptier than before,” said one Naver blogger who claimed to be a regular purchaser of some of the brand’s products. “I tried to purchase Propolis Essence online, but there was none in stock.”

Although they are faring far better than Skinfood, local brand shops - often referred to as “road shops” in Korea - have been on the decline over the past few years. At the other end of the market, multibrand stores, like Olive Young and Lalavla, have been expanding.

Several emerging brands are reporting strong sales as well. The list of newcomers includes 3CE, Aprilskin and VT Cosmetics. Industry watchers say the mixed performances of beauty brands may be more than a short-term trend. It may be the result of an industry shift in an age where beauty customers no longer rely on brand names when making purchasing decisions.

“The fierce competition in the local beauty market has yielded an experienced work force,” said Park Jong-dae, an analyst at Hana Investment & Securities. “As long as you have a good idea, the barriers to the beauty business in Korea are very low so entrepreneurs are constantly releasing new products.” 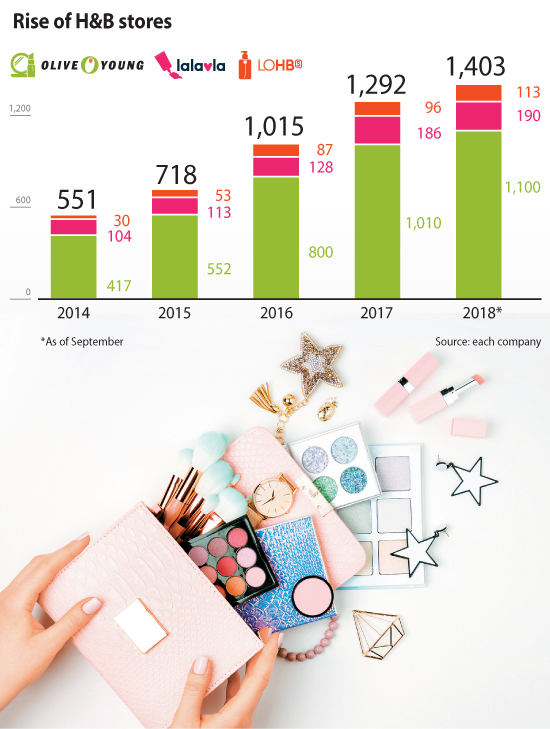 Multibrand on the rise

Tony Moly, Etude House and Able C&C (which owns Missha and A’pieu) went into the red in the first half 2018, according to their financial statements. Espoir also saw operating losses during the same period, while sales at The Face Shop dropped 13 percent year on year. Skinfood had operating losses for four years in a row.

“Brand stores are going through a very difficult time at the moment,” said an industry source from one of the leading “road shop” brands. “Sales are lower compared to around 2014 and 2015 when Chinese tourists came to buy products in bundles. The market trend is changing so fast, and there doesn’t seem to be an immediate answer to cope with this situation.”

The beauty business in Korea received a series of major blows following the Golden Age of inbound Chinese tourism.

In 2016, it was the Middle East Respiratory Syndrome epidemic. The following year came the Terminal High Altitude Area Defense crisis, in which the deployment of the antimissile system resulted in a drop in Chinese tourists, starting from March. Relations between Korea and China seem to have passed the low point, but the number of inbound Chinese tourists has not yet fully recovered, and neither have sales at local single-brand stores.

The void has not been filled by local customers. Over time, they have increasingly turned to multibrand retailers, most notably Health & Beauty (H&B) stores like Olive Young. The number of stores of the top three H&B chains in Korea - Olive Young, Lalavla (previously Watsons) and LOHB’s - grew threefold over the past five years to more than 1,400 nationwide as of September.

The main change in the market is that customers prefer seeing multiple brands at once.

“A major factor in the surge of H&B stores is that the age of customers starting with cosmetics is falling,” wrote Jeon Young-hyun, analyst at SK Securities, in a report earlier this month.

“This has driven demand for brands that are relatively low-profile and low-priced. Customers buying these brands offline tend to be sensitive to new trends and have less loyalty to specific brands. Therefore they prefer to see a lot of options in a short span of time when it comes to beauty shopping.”

Beauty conglomerates are increasingly making moves this year to adapt to the change.

Amorepacific, which owns the Innisfree and Etude House brands, is experimenting at its Aritaum stores. The Aritaum Live store that opened in Gangnam last month sells non-Amorepacific products, the first time since the chain launched in 2008. Half of the items in the store are outside brands.

LG Household & Health Care is transforming The Face Shop branches to the Nature Collection, which sells products of many brands, such as Beyond and Dr. Belmeur. In late September, it started selling products made by a local niche brand, VT Cosmetics. 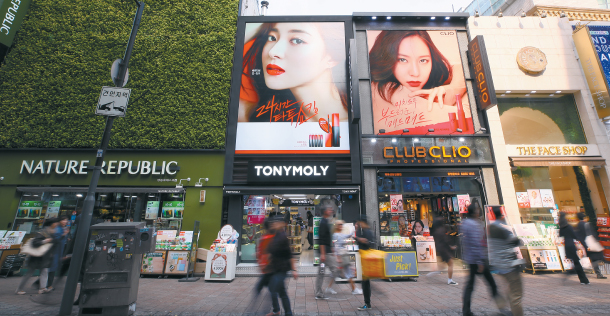 Opportunities for the small

The expansion of multibrand stores is creating opportunities for small beauty brands which, in the past, had few routes to market. This opening of channels is attracting more new players to join the game. Last year, the number of product manufacturers and sellers in the local beauty industry totaled 11,834, a threefold increase compared to 2013.

“New brands take about six months to make their product with us,” said a Cosmax spokesman. “Some products take only three months from development to production. It depends on how the decision-making process goes.”

The digitalization of marketing strategies is another attribute of niche companies. The dominant tool for promoting a product in the age of social media is viral marketing: Customers upload content on their experiences using specific product, which is shared to encourage purchases by others.

This allows them to avoid pricey advertisements on traditional media, like television or print. As experience-based content prevails online, low-profile brands have been able to sell products. They just need to provide online customers with good quality, a new concept or interesting content on Facebook or Instagram.

Added with the rise of multibrand stores, companies now have more ways of provoking curiosity online and can offer them brick-and-mortar points to experience the products in reality.

Digitalization of the market

The digital ecosystem helps young brands more than it does older, traditional brands: According to British research firm Nielsen, the top 20 cosmetics brands capture 90 percent of sales at brick-and-mortar retailers, but in the ecommerce scene, they only take about 14 percent of the market.

According to analysts, large beauty companies fall behind smaller peers in the digital age for two major reasons: fragmentation in consumer demand and the speed of the beauty cycle.

Young consumers today crave personalization. Beauty technology has not yet developed to a point where each person can create their own recipe, but with a great number of brands in the market with different targets and concepts, customers can find a unique selection to call their own.

A segmented consumer base for niche brands means they will have a customer base to sell to as long as they have a clear brand strategy distinguishing them from others. On the other hand, that same point creates challenges for large-sized companies.

“Traditional businesses were focused on maximum category presence - being ‘everything to everyone’ within their category boundaries,” said Deloitte in a beauty market report last year. “This model may be now breaking down as the market becomes more fragmented, and as influencers operate a pick-and-mix approach to products, brands and categories.”

Another challenge they face is speed. Social media and the internet are bombarding beauty consumers with new products and brands on a daily basis. This has sped up the cycle of beauty trends to a pace never before seen. More than 90 percent of new product launches fail within the first 12 months, says Deloitte.

Tracking the change in trends online and making swift decisions in order to release products in a timely manner has become ever more important, but large organizations are not always able to adapt.

Smaller brands are more likely to have a shorter decision-making process, which also paves the way for young innovative staff to experiment with unconventional ingredients and strategies. Large and traditional organizations are not so easily able to approve experimentation of this type.

“In our company, the CEO is immediately informed throughout every part of the process, from analyzing the market to devising a targeting strategy,” said a spokesman for Aprilskin, a four-year-old local niche brand which is deemed one of the largest success cases in Korea. “Because the CEO is there from the early stages of product development, decision making does take much less time.”

M&A may be the answer

Then is there a strategy large companies can adopt to cope with this market shift?

An option for global beauty giants have been actively employing is M&A. World-class players like Unilever, L’Oreal, Estee Lauder and Shiseido have been main buyers of assets in the market over the past three years.

Dr.Jart+ sold one third of its shares to the Estee Lauder Group in 2016. Last year, Unilever purchased skin care brand AHC for 3 trillion won ($2.6 billion), while Stylenanda’s color cosmetics brand 3 Concept Eyes was brought under the wing of L’Oreal Group for 600 billion won in June.

Analyst Lisa Hong at Euromonitor International said the main intention of global brands in acquiring Korean beauty companies is to “diversify their brand portfolios in a way to appeal to Chinese consumers,” where they have less experience compared to markets in Europe and the United States.

“In an environment where competition is fierce, large companies have to act fast,” she said.