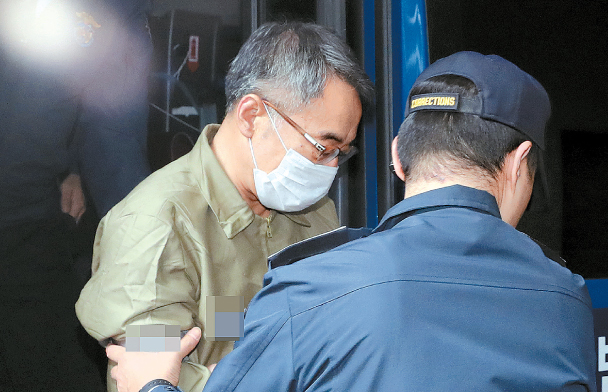 Lim Jong-hun, the former deputy head of the National Court Administration, the Supreme Court of Korea’s administrative affairs body, was arrested Saturday for allegedly assisting the former chief justice as he abused his power and delivered rulings that curried favor with the previous administration.

The Seoul Central District Court, which issued his arrest warrant, said that Lim may destroy evidence. Lim was questioned by the prosecution on Sunday.

In their arrest warrant, the prosecution charged Lim with abuse of power, dereliction of duty, divulging official secrets, obstruction of the performance of official duties by fraudulent means and drafting false public documents.

The case concerns ex-chief justice Yang Sung-tae, who served most of his term under former President Park Geun-hye from 2011 to 2017. He is accused of influencing decisions at the Supreme Court to curry favor with Park, a direct violation of the constitutional principle of separation of power. He allegedly used politically sensitive trials as bargaining chips and kept a blacklist of judges based on their political leanings.

An internal investigation by the Supreme Court uncovered 174 documents in the computers of the National Court Administration that suggest Yang might have violated the separation of powers.

One document, titled “Ways to persuade the BH for the purpose of setting up an appellate court within the Supreme Court,” suggested that a ruling in favor of Won Sei-hoon, a former intelligence chief on trial for spying during an election, would be a “conciliatory gesture toward the BH,” referring to the Blue House.

A special investigative unit at the powerful Seoul Central District Prosecutors’ Office has been working on the case since June.

When Yang was the court’s chief justice, Lim was the head of the planning and coordination bureau and the deputy head of the National Court Administration. Prosecutors believe Lim was the key aide to Yang for his alleged abuse of power.

Lim’s lawyer told the press on Sunday that “the prosecution arrested Lim without a valid reason, as he has no reason to run from authorities or try to destroy evidence.”

The trials possibly implicated in the case include suits filed by Koreans who were forced to produce armaments for the Japanese military during World War II.

Millions of Koreans were forced into labor by Japanese companies during World War II, and hundreds of thousands are believed to have died from dismal work conditions and exhaustion. Only around 3,500 victims remain, most of them in their 90s.

In the first year of Park Geun-hye’s presidency in 2013, her administration was seeking to improve ties with Tokyo. She ordered her aides to persuade the judiciary to delay trials for lawsuits between Japanese companies and Korean victims of forced labor, Park’s former chief of staff, Kim Ki-choon, told prosecutors during his questioning in August.

According to Kim, Lim and then then-Foreign Minister Yun Byung-se secretly met Cha Han-sung, then-head of the National Court Administration, in December 2013. At the meeting, Kim asked the judiciary to delay proceedings for the lawsuits based on the president’s directions. Yun described the negative diplomatic repercussions that would ensue if the court ruled in favor of the victims.

The justices ultimately delayed their decision, and the cases remain pending in the Supreme Court. In the meantime, seven of the nine original plaintiffs have died.

Cha and other former heads of the National Court Administration, as well as Yang, may be summoned by the prosecution for questioning in the near future.