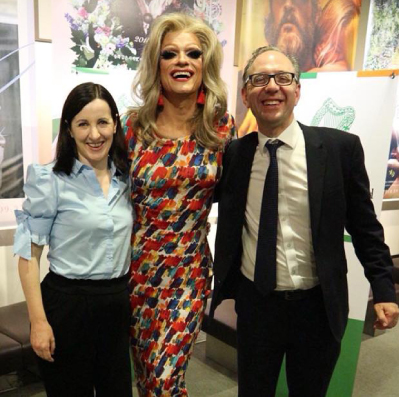 From right, Irish Ambassador to Korea Julian Clare, drag queen Rory O’Neill, and Ambassador Clare’s wife Siobhan Tracey, at the screening of “The Queen of Ireland,” a documentary on O’Neill and his impact in Ireland under his stage name Panti Bliss, on Oct. 2 at the Cinecube theater in central Seoul. [EMBASSY OF IRELAND IN SEOUL]

Rory O’Neill, Ireland’s most famous drag queen, said he hopes that Korea will also come to recognize the voice of its LGBTI+ community as Ireland did, during a visit to Seoul last month.

The historically conservative Catholic country became the first in the world to legalize gay marriage via popular referendum in 2015. But LGBTI+ activists in Korea face a tougher situation than in Ireland, said O’Neill, who is better known by his stage name Panti Bliss.

“I think the one major difference is that in Ireland we don’t have a large evangelical Christian movement, so we didn’t have to face such strongly organized anti-LGBTI+ opposition, as is the case in South Korea,” he told the Korea JoongAng Daily in an email interview following his visit to Seoul this month for a screening of a documentary about him. “Ireland too was a very socially conservative country when we started our journey to LGBTI+ equality, and the change was achieved slowly. The most important part of achieving that change was allowing the general population to get to know us - Ireland’s LGBTI+ citizens - as friends and neighbors and co-workers and family members, etc., through the process of coming out.”

O’Neill was in Seoul from Oct. 1 to meet with activists for LGBTI+ rights in Seoul and share his experience in the fight for LGBTI+ rights in Ireland, including the 2015 referendum that legalized gay marriage. “The Queen of Ireland,” a 2015 documentary on O’Neill, was screened at the Cinecube theatre in central Seoul on Oct. 2. His visit was organized by the Irish Embassy in Seoul.

O’Neill came to attention as an activist for the LGBTI+ movement in Ireland through the Pantigate scandal in January 2014. In an appearance on “The Saturday Night Show” on RTE, he called out some Irish journalists for being homophobic. They later sued the network for mentioning their names. RTE ended up paying them.

Paul Murphy, an Irish politician who was then a member of the European Parliament, called the scandal “an attack by the right-wing conservative forces in Ireland, acceded to by RTE, designed to censor debate in advance of a likely referendum on marriage equality” at a meeting of the Dail, Ireland’s parliament, in February 2014.

The same month, O’Neill gave a speech at a local theater on homophobia in Irish society, which was received by a standing ovation. Ireland legalized gay marriage the next year.

O’Neill, whose parents are Catholics, said gay rights are not about pitting one group against another.

“I found it very inspiring talking to the LGBTI+ activists that I met,” he said. “They are very brave people and they are not daunted by the long road they have ahead of them. They have much to offer and contribute to Korean society.”

Gay marriage is not legal in Korea, but a movement for LGBTI+ rights is growing. The biggest parade in Seoul for LGBTI+ rights, the Seoul Queer Culture Festival, has been held annually since 2000, and participation grows every year.

However, there is also a stark division visible at the festival. Activists opposed to gay rights, including religious groups, hold annual protests against the parade. One common reason cited by those who oppose the festival and other movements for LGBTI+ rights throughout the world is the higher rate of HIV and AIDS in men who have sex with men.

“The number of AIDS patients has been on the rise in Korea because we have more homosexual people,” wrote a user in a petition to the Blue House against queer festivals in Korea on Oct. 7. “The number of people infected with HIV is also on the rise among teens and those in their 20s.”

According to a study by MPact Global Action for Gay Men’s Health and Rights and the World Health Organization in 2015, “Young men who have sex with men are at greater risk for acquiring HIV than their heterosexual and older counterparts.”

“Well, viruses are not moral agents ? people who catch the flu virus are not morally inferior to people who don’t catch the flu,” O’Neill said. “If we were to follow the logic of that argument, it would suggest that lesbians are the best people of all, because the incidence of HIV among the lesbian community is lower than that of the heterosexual population! The best way to stop HIV infection, as experience all around the world has shown, is education.”

“I was in Seoul for two days in 1991, but that was a very long time ago and a very short visit, and of course Seoul has changed so much in that time that it felt like my first visit!” he said. “I’d like to thank the wonderful people of Seoul for being so welcoming and warm to me, and for listening with an open heart to Ireland’s story ? a story we are very proud of. And I hope it’s an inspiring story for LGBTI+ activists in your beautiful country.”