Koreans start their return from Saipan

Koreans start their return from Saipan 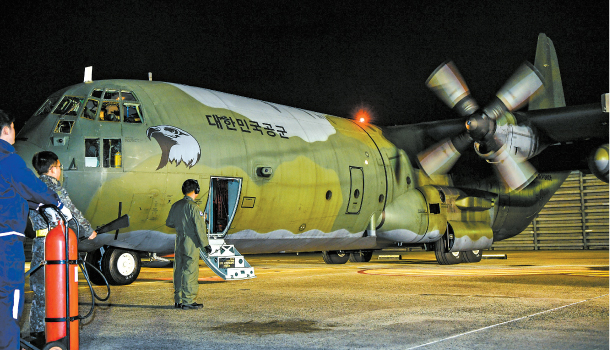 A Korean military plane prepares to take off at an air base in Gimhae, South Gyeongsang, Saturday morning to fly to Saipan, where about 1,600 Korean tourists were stranded after Super Typhoon Yutu devastated the U.S. territory. [YONHAP]

Of the 1,600 Korean tourists stranded on Saipan last week after a super typhoon swept the Western Pacific island, at least 141 returned home over the weekend. The rest are expected to come back via multiple flights through today, according to Korean authorities.

A Korean military plane was dispatched to the U.S. territory on Saturday to transport Korean tourists to nearby Guam, the Ministry of Land, Infrastructure and Transport said, as Saipan’s airport may not start normal operations anytime soon.

The military plane went to Saipan, picked up some tourists and dropped them off on Guam. It repeated the same process once more to bring a total of 161 people to the adjacent island. Two chartered planes from Jeju Air and T’way Air eventually brought 141 Koreans from Guam to Incheon International Airport on Saturday night and Sunday morning.

Authorities expected 600 more Koreans to have returned to Incheon on Sunday. None had arrived as of press time. About 1,000 more are expected to arrive today, mostly through chartered planes from Jeju Air, Asiana Airlines and T’way Air.

One 302-seat Asiana Airlines plane left Incheon International Airport at 7:30 a.m. Sunday for Saipan. It planned to return to Incheon at 6:10 p.m. with Korean tourists on board.

Jeju Air and T’way Air each sent a plane to Guam on Sunday as well. A Korean military plane was expected to transport around 300 Korean tourists trapped on Saipan to Guam on Sunday. The Jeju flight was planned to depart from Guam at 2 p.m. Sunday and touch down in Incheon at 6:55 p.m., while the T’way flight was set to depart Guam at 8 p.m. Sunday and arrive in Incheon at 1 a.m. Monday. 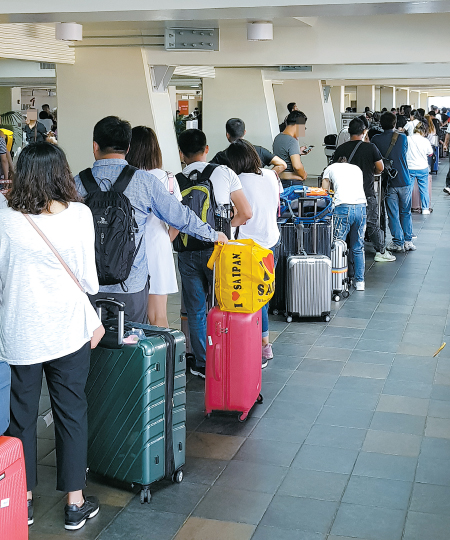 Korean tourists wait to go through departure procedures at an airport in Saipan on Sunday to board a Korean military plane dispatched for an evacuation operation. [YONHAP]

The Transport Ministry said 12 flights were originally scheduled to fly from Guam to Incheon or Busan Sunday, and that some Koreans who were stranded in Saipan might be able to book a seat on one of them if there were any available.

Four other planes from Korea will fly from Incheon to Saipan today, the Transport Ministry said, to bring whoever is left on the island back home. That evacuation plan, however, hinges on the weather and circumstances at Saipan’s airport, a ministry official said.

The Transport Ministry said 1,875 people were stranded in Saipan recently after arriving on a Korean airplane, 1,600 of whom were Korean. The rest were said to have been Chinese. Super Typhoon Yutu decimated Saipan early last Thursday with 180-mile-per-hour (289 kilometers-per-hour) winds. It was one the strongest storms to ever hit the United States.

At least one person was killed during the storm. A 44-year-old woman taking shelter in an abandoned building died after it collapsed in the storm, Saipan authorities said, and several others were injured. The typhoon caused major infrastructure damage as well as power and water outages. Korea’s Ministry of Foreign Affairs said that at least one of the 2,000 Korean residents on Saipan was injured during the storm.