Korea’s football governing body is set to punish a national team defender who was found to have doctored his community service records, an official said Monday. 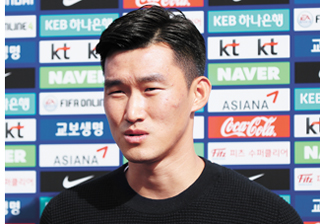 Jang Hyun-soo speaks to reporters at the National Football Center in Paju, Gyeonggi on Oct. 8. [YONHAP]

A Korea Football Association (KFA) official said that the organization is taking steps to discipline Jang Hyun-soo, who recently admitted his wrongdoing after a lawmaker accused him of doctoring his community service records during a parliamentary audit meeting on the Military Manpower Administration.

Jang was bombarded by football fans after Ha pointed out the footballer’s misconduct.

All able-bodied Korean men should serve in the military for about two years. But Jang is exempt from serving the full mandatory service after he earned a gold medal at the 2014 Asian Games. By law, all Olympic medal winners and Asian Games gold medalists earn the exemption in recognition of their contribution to the country’s reputation and prestige.

But those who earn exemption also need to complete basic military training, which can take up to 60 days, as well as 544 hours of community service in sports over 34 months. The law on community service was designated in July 2015.

According to Ha, Jang submitted a document that he had completed 196 hours of community service in December 2017. But it turned out that the date Jang had mentioned for the service was actually impossible to do outdoor activities because of heavy snow. In addition, photos that Jang submitted for proof of community service on various dates were actually taken on one day, the lawmaker claimed.

After Ha released a statement Sunday, the KFA announced that Jang won’t be selected for Korea’s friendly matches in November.

Under the conscription law, those who fabricate community service records receive a warning and a five-day extension to their original service period. The Sports Ministry is expected to mete out such a punishment against the FC Tokyo defender.

The KFA rule also states that a player who is embroiled in social misconduct is banned from the national team selection and could face penalties from a warning to a lifetime ban.

Jang has been a core player for Korea, representing the country at the 2018 FIFA World Cup and the 2016 Rio de Janeiro Olympics. He featured in all four matches under new head coach Bento. The 27-year-old defender has three goals in 58 caps.