The heads of securities companies listen to a speech in an emergency meeting in the wake of a plunge in the capital markets at the Korean Financial Investment Association headquarters in Yeouido, western Seoul, Monday. [YONHAP]

Although foreign investors, who have been offloading shares for eight consecutive trading days, contributed to Monday’s disappointing close, retail investors were the driving force that pushed the Kospi to its lowest point since Dec. 7, 2016, when the market closed at 1,991.89.

Both markets have been on losing streaks for five consecutive trading days.

“Earlier in the day there was an attempt at a rebound,” said Lee Kyung-min, an analyst at Daishin Securities. “But due to investment anxiety, the market retreated later in the day.’”

The fall occurred even after the financial authority announced it was earmarking 500 billion won to stabilize the stock market during an emergency meeting held before the market opened on Monday.

Financial Services Commission (FSC) Vice Chairman Kim Yong-beom on Monday said the government will be investing 300 billion won on undervalued companies traded on the Kosdaq market starting next month. The so-called scale-up fund is expanded from the FSC’s initial plan for a fund of 200 billion won. 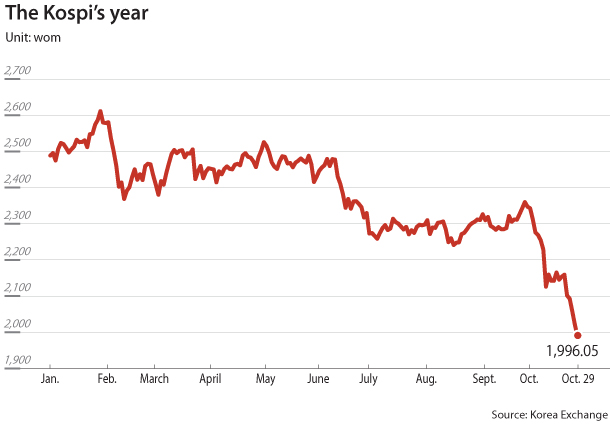 The FSC was planning on getting 100 billion won in investments from securities-related institutions including the Korea Exchange, the Korea Securities Depository, the Korea Financial Investment Association and an equal amount from private investors to finance a “Kosdaq scale-up” fund.

On Monday, the FSC said it will also be getting a minimum of 200 billion won in investment from the securities-related institutions, and their primary purpose would be to stabilize both the Kospi and Kosdaq.

“Although Korea’s economic fundamentals are evaluated [by global credit rating agencies] as strong, due to the size and the openness of our market, both our financial market as well as our economy could be affected by uncertainties in external conditions,” said FSC Vice Chairman Kim during an emergency meeting held Monday.

The FSC’s meeting took place among growing discontent about the government’s passive role as the market falls.

According to the FSC, the Korean stock market has tumbled more than any other emerging market in Asia except for China. As of Friday, the Kospi had fallen 17.8 percent compared to the end of last year. Taiwan’s stock market lost 10.8 percent in the same period while Thailand’s market was down 7.1 percent and Malaysia’s down 6.3 percent. The Indonesian market lost 9 percent during the same period. China had the sharpest fall of 21.4 percent.

Foreign investors currently accounts for more than 35 percent of total investment on the Kospi.

Despite the markets’ steady decline, the FSC vice chairman expressed confidence in the Korean market, echoing a remark made by FSC Chairman Choi Jong-ku on Friday, which was, “There is no problem in market soundness in general.”

“Our economy’s fundamentals are stronger than any other country’s, and the recent readjustment could be an opportunity for our stock markets,” the FSC vice chairman said.

“The fact that the ratio of foreign investors is high in our stock market shows our markets are stable investment sites, which is a positive,” Kim said. “But it is sad that foreign investment is exiting regardless of our fundamentals when external factors worsen.”