Last believers in the North

Last believers in the North

JOO JUNG-WAN
The author is the head of Career Taskforce at the JoongAng Ilbo. 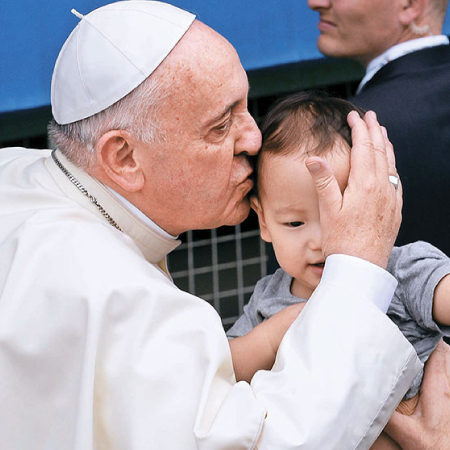 Pope Francis kisses a boy at a mass held at the Daejeon World Cup Stadium in South Korea in August 2014. [JOONGANG ILBO]

It was Easter in April 1988, a few months before the Seoul Olympic Games, when a dramatic event took place in the Vatican. Two Catholics from North Korea met with Pope John Paul II and received a blessing. North Korea probably struggled to find them at the request of the Vatican. They were a married couple, Mark Pak Dok-su and Theresa Hong Do-suk.

The Vatican sent Father Jang Ik, now a bishop, to Pyongyang in June 1987, and he met five North Korean Catholics, including the couple. Jang wrote on a booklet published by the North Korean Missionary Committee, “After all the churches were destroyed and believers were scattered, Catholics pursued their religious lives individually or as a family.” He added, “They continued to hold morning and evening prayers and replaced mass with citing the Lord’s Prayer and Hail Mary 33 times. Mark Pak and Theresa Hong did not want to miss the Solemnity, so they sang Latin hymns that they had memorized.”

The North Korean regime oppresses religion. After the Korean War, Catholic priests were arrested, abducted or killed. As a result, there was not a single Catholic priest left in the North.

“When I went to my room, I could see bullet holes on the walls and ceiling like the stars on the night sky,” said Father Lim Chung-sin, who had served at Goksan Church in Hwanghae province until October 1950. He barely saved himself. In his memoir, he wrote, “Fathers Seo, Yang and Chon almost survived but were killed as the Communists were retreating.”

Changes started as North Korea contacted the Vatican in the late 1980s. Around this time, Jangchung Church was constructed in Pyongyang. According to Bishop Jang, Theresa Hong was a native of Pihyon, North Pyeongan Province, and was 55 years old in 1987. She was a teenager at the time of the 1950-53 Korean War and kept her religion in hiding for 37 years.

Hong’s story was also featured in a book by former North Korean diplomat Thae Yong-ho. Workers’ Party executives searched old documents to find faithful Catholics before the Korean War, and Theresa Hong was found. She denied it at first, but later confessed that once God enters the heart, he never leaves. Thae wrote that the people at the Vatican saw her eyes and acknowledged that she was a believer.

What happened to Theresa Hong after she met the Pope? If she is still alive, she will be 86 years old. If Pope Francis visits North Korea, will he meet real believers?