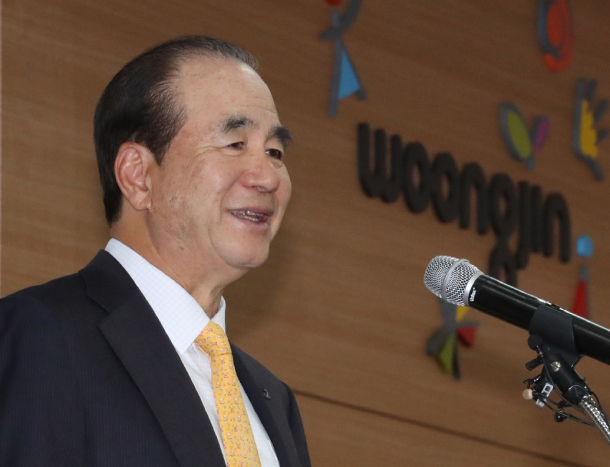 Yoon Seok-keum, chairman at Woongjin, speaks about a plan to buy back shares of Coway on Monday in central Seoul. [YONHAP]

Woongjin Corporation, a mid-sized conglomerate, announced on Monday it would purchase a 22.17 percent stake in Coway, a home appliance rental service Woongjin once owned, from a private equity group for 1.68 trillion won ($1.47 billion).

The buyback comes nearly six years after Woongjin, which filed for court receivership in September of 2013, sold a 30.9 percent stake in the then-named Woongjin Coway to MBK Partners, a Korean private equity fund, for 1.19 trillion won.

The deal included conditions that Woongjin not participate in the water purifier business for five years and that it be given priority in the purchase of additional Coway shares.

Woongjin announced last year it was planning to reacquire its stake from MBK. It established a consortium recently with STIC Investments, a private equity fund, to finance the buyback.

The deal came just two months after Woongjin announced it would issue new shares in preparation for the purchase of the stake from MBK.

The acquisition is set to close on March 15 of next year.

The repurchase is being done to “diversifying revenue channels through diversifying businesses,” said Woongjin in a regulatory filing.

Woongjin’s total assets will grow to 4.5 trillion won with the repurchase from 2.5 trillion won. Following the acquisition of Coway, Woongjin will have a combined 33,000 workforce doing home visits.

Woongjin is optimistic about the appliance rental market. Due to the increase of single households and the aging of society, the rental market has posted 10 percent annual growth over the past several years and is expected to gather momentum over time, the company says.

MBK’s net earnings from the Coway deal is seen at around 1 trillion won.