Xiaomi’s Pocophone F1 to go on sale next month

Xiaomi’s Pocophone F1 to go on sale next month 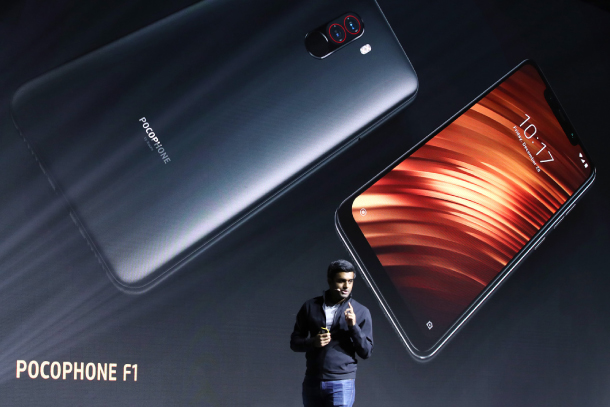 Jai Mani, the head of product at Xiaomi’s Poco Global, introduces the Pocophone F1 at a press conference held in southern Seoul on Monday. [YONHAP]

The Pocophone F1, the first smartphone from Xiaomi’s sub-brand Poco Global, was first unveiled in early August. The F1 will cost 429,000 won ($376) here, around one-third of the price of an Apple iPhone XS and half the price of Samsung Electronics’ Galaxy Note 9.

The phone has already proved to be a success in other markets, especially in India, where it raised 30 billion won in sales within the first five minutes.

The F1 comes with six gigabytes of RAM and three storage options: 64, 128 or 256 gigabytes. In Korea, only the 64 gigabytes will be available for purchase. SK Telecom, KT and LG U+ will start receiving preorders from Nov. 12.

Jay Mani, the head of product for Poco Global, said the core motivation for developing the Pocophone F1 was the market trend where fierce competition drives manufacturers to add all kinds of new functions and features that aren’t relevant to everybody.

“So the phones you have today - they have all these new functions but many do not appreciate them, nor are they excited about them, and yet the prices have come up to the current level,” he said in a press conference held in southern Seoul on Monday. “We wanted to buck this trend.”

The Pocophone F1 focuses on performance. Inside its plastic body, the F1 uses the same processor chip as the Galaxy Note9 and LG Electronics’ latest V40: the Qualcomm Snapdragon 845. Its battery storage is 4,000-milliampere hour, larger than most phones released this year and equivalent to the Note9. To ensure its high speed, the F1 has a cooling system that keeps the phone’s temperature down. The hotter a device, the slower it gets, said Mani.

However, it also adds some of the core features used in competitors’ top phones today. For example, the artificial intelligence-embedded camera can add 25 filters while taking a photo by automatically perceiving what the object is, while a camera on the front of the device allows for face recognition.

“Reaching out to loyalists, that’s something that takes time, but there are also a lot of people who we can make think: ‘Does [my phone and its price] make sense?’” said Mani.