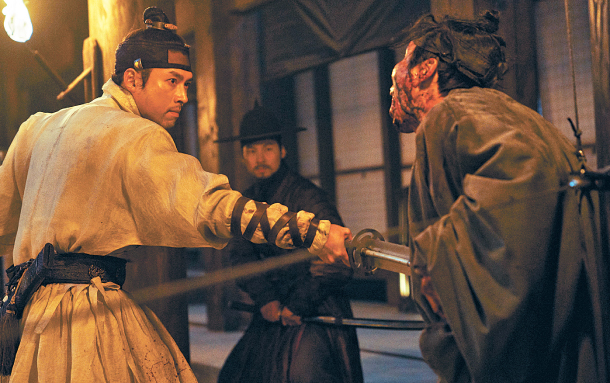 In the slow fall movie season, period zombie thriller “Rampant” dominated Korea’s weekend box office, while last weekend’s winner, the sci-fi flick “First Man,” slid all the way down to the fifth spot. The widely-anticipated rom-com “Crazy Rich Asians,” which was boosted by celebrities including Eric Nam, only managed to make it to the sixth spot.

The second collaboration between actor Hyunbin and director Kim Sung-hoon, who worked together on the popular action flick “Confidential Assignment” (2017), their latest “Rampant” sold 841,000 tickets at 1,351 screens from Friday to Sunday. The film’s sales revenue accounted for a whopping 51.6 percent, or 7.47 billion won ($6.7 million), of the entire weekend’s ticket sales.

Also starring Jang Dong-gun and Cho Woo-jin, “Rampant,” which is set in the Joseon Dynasty (1392-1910), is a coming-of-age tale of Yi Chung (Hyunbin), a prince who returns from the Qing Empire after his brother - the trustworthy crown prince - dies.

Upon returning to Joseon, Yi encounters zombies who feast on the necks of whoever they catch and rapidly spread their disease. Though Yi initially plans to return to the Qing Empire after the short visit, he gradually becomes deeply invested in handling the zombie issue. Since its release on Thursday, “Rampant” sold more than a million tickets as of the weekend.

“Dark Figure of Crime” maintained its second spot from last weekend in its fourth weekend with 161,000 admissions sold. The movie, which depicts a psychological confrontation between a prisoner (Ju Ji-hoon) and a determined detective (Kim Yoon-seok), has so far sold a total of 3.7 million tickets since its release on Oct. 3. “Miss Baek,” a tale of a lonely woman (Han Ji-min) who turned her back against the world, climbed up a spot to arrive at third, selling 97,200 tickets. The Hollywood’s antihero movie “Venom,” starring Tom Hardy, fell one place to fourth with 96,000 tickets. “First Man,” helmed by the “La La Land” director Damien Chazelle and starring Ryan Gosling, rounded out the top five with 95,000 tickets sold. Based on James R. Hansen’s book “First Man: The life of Neil A. Armstrong,” the biopic tells the story of the first man to step foot on the moon. 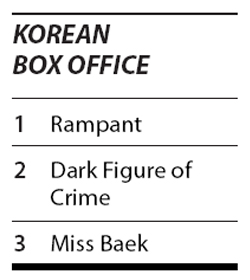 Despite the buzz it has generated internationally, rom-com “Crazy Rich Asians” debuted at the sixth spot in Korea’s weekend box office, selling just 87,000 tickets from Friday to Sunday. Based on Kevin Kwan’s best-selling novel of the same title about Singapore’s wealthy elite, the Warner Bros. release is a rare Hollywood film that stars Asian actors. It is the first Hollywood studio film to feature an all-Asian starring cast since “The Joy Luck Club,” released 25 years ago.

Directed by Jon M. Chu, the Cinderella tale is about Rachel Chu (Constance Wu), an economics professor in New York City, who agrees to go to Singapore with her boyfriend, Nick Young (Henry Golding), to attend his best friend’s wedding. During her trip, she meets Nick’s family, including his mother (Michelle Yeoh), and learns that her boyfriend comes from an extremely rich family.