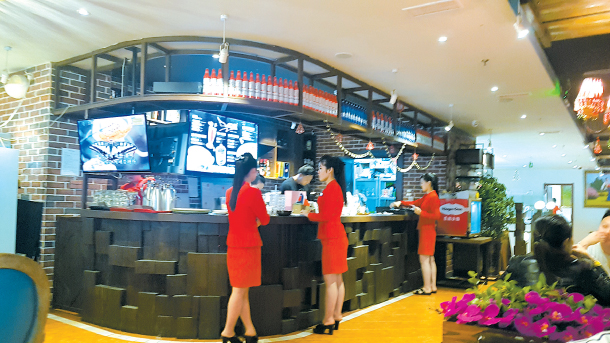 Waitresses stand at a bar at a newly-opened North Korean restaurant in Dandong, China. This restaurant not only serves Korean dishes but also Western food like spaghetti, coffee and ice cream. [JOONGANG ILBO]

Autumn had arrived in North Korea last week as our Chinese ferry traveled along the Yalu River, which divides China from the North.

A goat lazily chewed grass on a hill as its trees began to show the colors of fall. Near the riverside, an old man cast his fishing net into the river to catch his dinner. Farmers gathering their corn harvest sat under a tree and chatted about life’s monotonies.

When we waved at a North Korean soldier sitting on a two-story watchtower overlooking the border with China, he replied by putting both his arms over his head in the shape of a heart, much to our surprise. A shoddily-dressed construction worker fixing up a building nearby made the same gesture, apparently ecstatic to see us.

These reactions were radically different from a year ago, when North Koreans would freeze or stare blankly when they spotted our Chinese boats filled with South Koreans passing by.

Such were our initial impressions of a 1,400 kilometer (870-mile) journey across the North Korea-China border. The expedition was undertaken by the JoongAng Ilbo’s NK BizForum team from Oct. 19 to 23 to better understand the changing North Korea’s economy as the country improves its relations with the outside world. 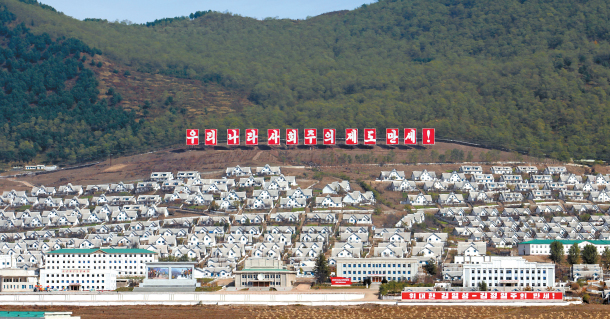 But underneath these pleasant observations lay an economy reeling from severe shortages and hardships and unable to overcome its structural limitations.

The chimneys of a battery factory on the banks of the Yalu River were churning out black smoke at an alarming rate. This factory was abandoned for over two decades, but restarted operation in 2016. Yet by September of last year, production had once again practically ceased, only occasionally working when possible. According to a local who accompanied us on the trip, the factory appeared to be on the uptick this past year.

When we tried to get a better view inside the factory using binoculars, we were shocked by what we saw. The factory’s walls were crumbling in many areas, but there was little evidence of any repair work. Its roof, made of slate, was in the same dilapidated state.

We wondered if the products made by this factory were even functional at all, given just how dismal the production conditions appeared to be.

The sight reminded us of what North Korean leader Kim Jong-un said after he visited factories in the Sinuiju area back in July. His remarks were filled with reprimands towards lower party functionaries for hastily patching up shoddy facilities, which he compared to stables.

As our ferry made its way upstream, we were confronted by the sight of the massive Supung Dam, the largest in all of Asia when it was completed under Japanese rule in 1943. With a width of 900 meters (2,952 feet) and a height of 106 meters, the dam once supplied 93 percent of the South’s energy needs. But after Korea was divided and the South and North both established separate governments in 1948, the North cut off all energy supply to the South, plunging Seoul into pitch darkness that May.

Today, the dam is jointly operated by the North Koreans and the Chinese, and China takes half of the facility’s energy output. Its dilapidated condition made it clear that the dam’s glory days were far behind it.

Nam Ho-ki, our entourage’s energy expert and a consultant for the South Korean energy firm SK Gas, said that the dam only produces around 600,000 kilowatts (kW) of energy annually. This is just a minor portion of the North’s total yearly energy output of 7 million kW.

By contrast, he said, South Korea produces 100 million kW a year. “Given that energy output is a good indicator of economic potential, North Korea appears to be facing many difficulties,” Nam said.

We could spot several attempts by the North to conceal the country’s hardships. On the riverbank facing China, there were several areas with new buildings and towns, though they appeared to be sparsely populated. In Hyesan, the capital of the North’s Ryanggang Province, which is across the river from China’s city of Changbai, dozens of new apartments towered over the river. But when we observed these buildings at night, only a few of their windows were illuminated with faint white light bulbs.

By contrast, the Chinese side was brightly lit, and residents appeared to be taking part in a lively festival at the local square.

In Chunggang County, just across the river from the Chinese city of Linjiang, there was a large residential district containing several new buildings that looked capable of supporting a few hundred residents.

Kim Jong-il, the previous leader of the North and father of Kim Jong-un, was said to have visited a nearby area several times. Its high-class apartments were erected to reflect Kim Jong-un’s taste for the posh residences he was accustomed to during his childhood studying in Switzerland.

Propaganda signs saying “Long live our socialist system,” loomed over a new village in Chunggang, but no residents were spotted.

As relations between the two Koreas warm, North Korean restaurants in China have been witnessing a new boom. In Dandong, the largest Chinese city on the Yalu, new North Korean restaurants are sprouting up. They sell not only traditional dishes but also Western food like spaghetti, coffee and ice cream. Sixty establishments sold North Korean-made ginseng tea for 400 yuan ($57.62), as well as makeup, nutritional supplements, alcohol and other products from the North.

In the Korean autonomous prefecture of Yanbian in China, South Korean tourists filled the Ryugyong North Korean restaurant. Many of the South Koreans were there to climb the nearby Mount Paektu, which straddles the border between China and the North. The South Korean government warned its citizens in China to avoid eating at North Korean restaurants back in 2016 over concerns that the proceeds from these eateries were financing the government, but in Yanbian, it seemed like the warning fell on deaf ears.

The number of defectors fleeing the North since Kim Jong-un’s rise to power is said to be rapidly decreasing. Some analysts have said this is because of its improving economy. Others, however, argue it is largely due to tighter controls at the border, which have made it harder to escape.

From our observations, the shallow river crossings that were frequently used by defectors fleeing to China are now mostly fenced off with metal wire and monitored by a litany of surveillance cameras. We also spotted Chinese signs in the area that warned against the trafficking of women and children, backing up the statistic that over 80 percent of all defectors from the North are women.

Kang Dong-wan, head of the Hana Center at Dong-A University, which supports North Korean defectors in the South, said that most of the North’s residents were relegated to a wretched life largely ignored by the elite in Pyongyang.

The 1,400-kilometer route we took on our journey across the North Korea-China border provided a highly illuminating glimpse into the lives of average people in the North. These are the regions that are largely overshadowed by the world’s interest in the fancy neon signs and colorful high rises of Pyongyang, the home of the country’s elite.