Trump is in no hurry to denuclearize North Korea

Trump is in no hurry to denuclearize North Korea 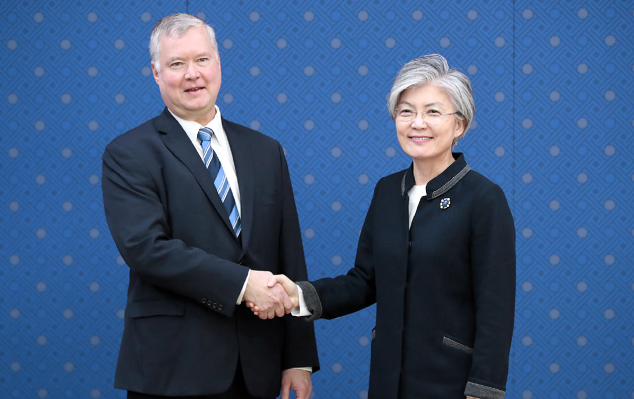 U.S. President Donald Trump said Saturday during a campaign rally in Illinois that he doesn’t care how long North Korean denuclearization takes as long as there is no nuclear testing.

The remark was made as denuclearization talks between Washington and Pyongyang remain deadlocked and a month after Trump said it “doesn’t matter” if it takes “two years, three years or five months” for the North to denuclearize.

Trump’s refusal to set a time frame seems to ignore North Korean leader Kim Jong-un’s thinking on the issue. South Korean President Moon Jae-in said in September, shortly after his third summit with Kim, that Kim mentioned his regime was willing to give up its nuclear arsenal by the end of Trump’s term in January 2021.

Trump boasted of his “great relationship” with Kim and how both sides were happy with each other, rebuking critics who say his administration isn’t moving fast enough to get the denuclearization job done.

“North Korea’s going to be a great economic place,” Trump said, again painting a rosy future for the North if it gives up its nuclear weapons. “The location is so good between Russia and China and South Korea.”

North Korea and the United States have been in talks for a second summit meeting, but local sources with knowledge of the discussions said Pyongyang isn’t coming up with a time or location, apparently due to discrepancies on the denuclearization process.

U.S. Secretary of State Mike Pompeo, who visited Pyongyang earlier this month and met with Kim, said during an interview with Voice of America on Oct. 19 shortly after his return to Washington that he hoped to meet with his North Korean counterpart “in the next week and a half or so” to plan the second summit.

Yet no meeting has been held.

Stephen Biegun, Trump’s special representative for North Korea, arrived in Seoul on Sunday for a three-day visit and met with his South Korean counterpart, Lee Do-hoon, and South Korean Foreign Minister Kang Kyung-wha on Monday. It was Biegun’s fourth visit to Seoul after being appointed in late August.

During his meeting with Lee, Biegun said the United States and South Korea have a “shared goal” of ending 70 years of hostilities on the Korean Peninsula, and that the “primary requirement” for both countries to that end is to achieve final, fully verified denuclearization of the North, known as FFVD.

With that comment, Biegun was reiterating Washington’s stance that a formal declaration to end the 1950-53 Korean War, which ended in an armistice, not a peace treaty, can only come after FFVD.

During her meeting with Biegun, Kang stressed the need to maintain the momentum from Pompeo’s latest visit to Pyongyang for denuclearization and the establishment of permanent peace.

Biegun met with Im Jong-seok, Moon’s chief of staff, at the Blue House Monday afternoon alongside U.S. Ambassador to Seoul Harry Harris and Allison Hooker, director for Korea at the White House National Security Council. The Blue House said Biegun’s meeting with Im was made at Washington’s request.