Kim Byung-hyun to return to mound in Australian league

Kim Byung-hyun to return to mound in Australian league

Former major league pitcher Kim Byung-hyun is continuing his baseball career with the Melbourne Aces in the Australian Baseball League (ABL) for the 2018-19 season. 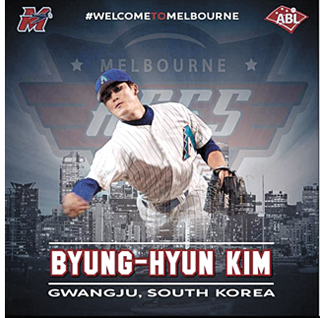 A screen capture from the Facebook page of the Melbourne Aces introduces their new Korean pitcher, Kim Byung-hyun. [MELBOURNE ACES]

“So Geelong might have a Korean team, but we have one of the greatest Korean players of all time,” the Aces posted on their Facebook page on Tuesday. “Please welcome World Series Hero Byung Hyun Kim!”

The post refers to the new all-Korean club based in the Australian city of Geelong, Geelong-Korea, that is joining the ABL this season.

After graduating from Gwangju-Jaeil High School, Kim made his professional debut in the United States by signing with the Arizona Diamondbacks in 1999.

In 2000, only in his second season with the Diamondbacks, Kim became the club’s closer, and in 2001, he helped his team win the World Series.

Kim is still the only Korean player to win the World Series ring.

When Matt Mantei returned to the team in 2003, Kim became a starter, but this didn’t last too long as he was traded to the Boston Red Sox just a few months into the season.

His career with the Red Sox only lasted until the 2004 season.

After being passed around a few different clubs, Kim eventually ended up in the Japanese Pacific League in 2011, before making his KBO debut with the Nexen Heroes in 2012.

Despite his impressive major league career, Kim wasn’t able to live up to expectations with the Heroes and was traded to the Kia Tigers in 2014.

With the Tigers, Kim appeared in 23 games during the 2015 season, and in 2016, he played in the Futures League and was eventually released.

To continue his career, Kim briefly joined the Dominican Winter League in October 2017.

In April this year, he threw the ceremonial first pitch at the Diamondbacks game against the Los Angeles Dodgers.

At the time, Kim wasn’t a member of any club.

The ABL is a semiprofessional league, and this season, a total of eight teams will be competing for the title, with the addition of Geelong-Korea and Auckland Tuatara, a team from New Zealand.

The Aces have advanced to the playoffs twice, during the 2010-11 and 2011-12 seasons, but have never won the championship.