A job seeker looking through job posting on a bulletin board at a government employment welfare center in Sejong on Tuesday. [YONHAP]

The number of nonregular employees in Korea has reached an all-time high despite President Moon Jae-in’s campaign promise to improve the quality of jobs.

According to a Statistics Korea study released Tuesday, nonregular workers in the country totaled 6.61 million as of August. That’s 36,000, or 0.5 percent, more than a year ago. A total of 1.1 million more people are now working under less favorable conditions, including lower wages and fewer benefits, than in 2008.

Nonregular employees now account for 33 percent of all paid employees. 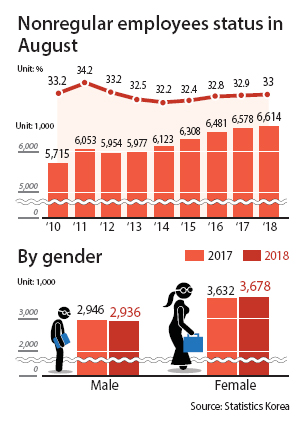 The number of nonregular employees fell significantly in categories that are sensitive to minimum wage hikes.

This includes commercial facilities management jobs, such as security and building manager positions, in which 48,000 jobs were lost to 846,000, and wholesale and retail jobs, where 37,000 fewer were employed in non-regular positions compared to a year ago to 644,000.

A sharp increase was reported in the number of people who were 60 years old or older in nonregular jobs. In August, 126,000 were added to bring the total to 1.6 million, the largest of all age groups.

Totals for those in their 50s also rose, with 19,000 nonregular employees added to bring the total to 1.4 million.

Statistics Korea believes the reason behind the increase is the fact the retired are looking for jobs to sustain their livelihoods.

By education, the number of nonregular workers with an undergraduate education or higher has risen significantly. In this category, the increase as of August was 38,000 to 2.17 million.

In the category of individuals with a middle school education, 3,000 more are in nonregular jobs, while a drop of 5,000 was reported for those with a high school education. The rise in the number of nonregular workers with higher educational backgrounds is in part the result of the fierce competition in the job market.

As the number of nonregular employees has been growing, working conditions have worsened.

Since 2010, wages of nonregular employees have been stuck between 54 and 56 percent of those of regular workers.

The number of regular employees in August increased on year by 3,000 to 13.4 million.

One of the first steps taken by President Moon was to visit Incheon International Airport where, in meeting with nonregular employees, he promised to address some of the shortfalls in terms of benefits and compensation.

“The principle will be to hire all employees as regular workers,” Moon said.

Most of the nonregular employees work in retail positions as cashiers, at restaurants, on cleaning crews or in security and are sensitive to minimum wage changes.

They not only get less in actual wages but usually receive fewer welfare benefits, including insurance coverage, compared to regular employees.

Korea saw a significant increase in the number of nonregular workers since the financial crisis of the late 1990s, when many of large companies went bankrupt and many jobs were lost.

The lack of flexibility in the labor market is a concern.

The government believes that upgrading workers to better quality positions with access to welfare and insurance benefits will result in higher consumption and contribute to sustainable economic growth.

So far, the labor market has not been cooperating. The 16.4 percent hike in the minimum wage this year is seen as a primary factor in job losses for nonregular workers at restaurants and convenience stores and in security and building management positions. As the minimum wage is set to rise another 10.9 percent, more jobs losses are expected.