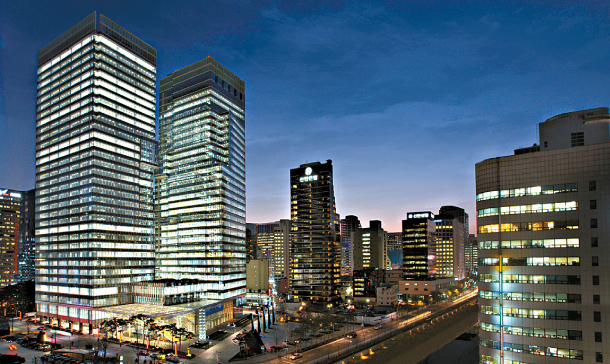 The process hasn’t been easy and has often generated losses, but only recently has it started paying off. Mirae Asset Daewoo, the country’s largest brokerage by capital, is taking the lead, as its eleven units based outside of Korea saw a whopping 229 percent increase in net profit in the first quarter of this year compared to a year ago.

The company said that overseas units based in such regions as Hong Kong, Brazil, Indonesia and Vietnam posted 66.5 billion won ($58.4 million) in net profit between January and March.

The primary strategy was aimed at offering a customized business focus unique to each region and its market situation and resources.

“For example, the New York office offers products and services centered around hedge funds, while the Los Angeles office focuses on asset management,” said a source at Mirae Asset Daewoo.

Principal investment refers to the act of buying securities in the open market and holding them for a certain period of time to potentially sell them later at a higher price.

The process offers a higher chance of a sizable profit than relying on commission fees.

Against this backdrop, Mirae has been keen to invest in symbolic landmarks around the globe, including the Cosmopolitan casino resort in Las Vegas and Cannon Bridge House in London.

The latest deal includes a $300 million investment to finance the $5.2 billion acquisition of The Center, a landmark skyscraper in Hong Kong.

Its investment is not confined to properties; Mirae has also turned its eyes toward the up and coming start-up scene by forming a strategic partnership with Naver, Korea’s top internet portal.

In a joint project, Mirae and Naver have invested $150 million in the Southeast Asian ride-hailing app Grab through a start-up fund.

The expanding global business helped the brokerage push up the proportion of global business and investment in its entire net profit to 27 percent as of the second quarter, up 8 percentage points compared to the end of last year.