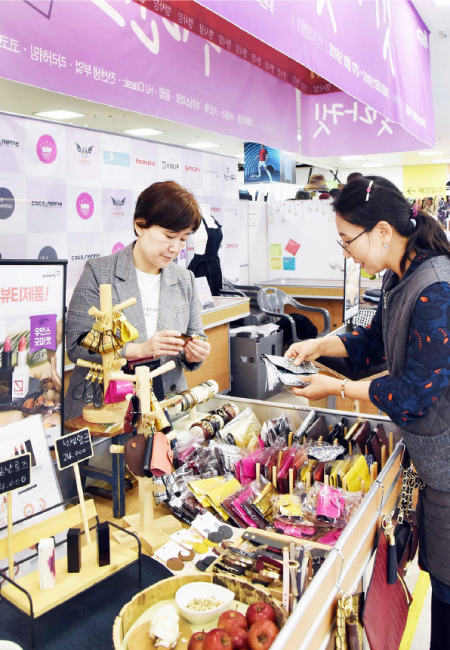 Homeplus is running the Women’s Good Market to help female entrepreneurs along with the Gyeonggido Job Foundation until Dec. 31. [HOMEPLUS]

Homeplus is running the Women’s Good Market at Homeplus’ Yeongtong outlet in Suwon, Gyeonggi. It aims to help female entrepreneurs along with the Gyeonggido Job Foundation until December 31.

The Women’s Good Market is a pop-up store designed by Homeplus and the Gyeonggido Job Foundation to help small and medium-sized enterprises (SMEs). Participating companies will be able to sell their products freely at large marts, which do not pay sales commission for three months until the end of the year.

According to the company, based on the consideration of the characteristics of large-sized marts that attract many housewives, the company has set up a place to introduce carefully-selected competitive products from companies that understand the lives of housewives and enhance their convenience.

Nine companies are participating in this event. They will show unique items that are not well known in the market due to their small production scale but help with housework and care for housewives.

“We have prepared this event as part of the company’s move to actively support female entrepreneurs and the growth of small and medium-sized companies and expand the support toward them,” said Na Kyung-an, a team leader for collaboration & development at Homeplus.