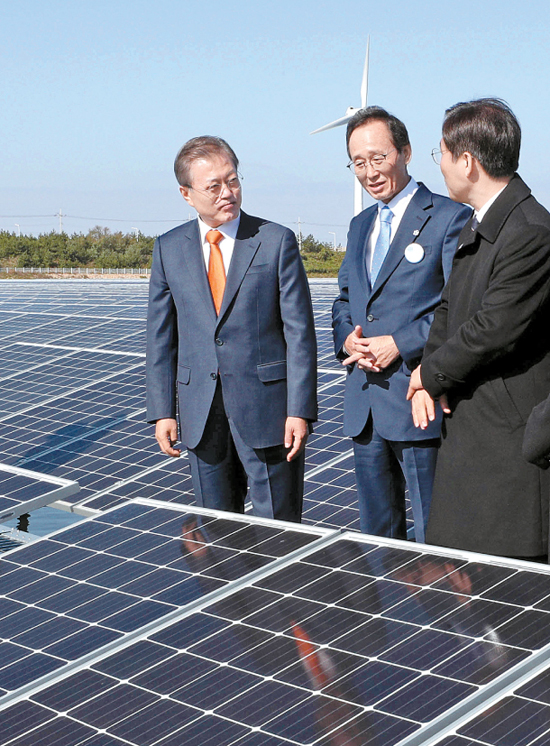 President Moon Jae-in, left, examines a solar power plant set up on Saemangeum, a reclaimed tidal flat on the coast of Yellow Sea in North Jeolla, on Tuesday. Moon promised to build the world’s largest solar energy complex on the reclaimed land. [YONHAP]

President Moon Jae-in on Tuesday promised to build the world’s largest solar farm along with an offshore wind energy farm in Saemangeum, a reclaimed tidal flat on the coast of the Yellow Sea in North Jeolla.

“We proclaim we will make Saemangeum in North Jeolla the centerpiece of the Republic of Korea’s renewable energy industry,” said Moon in a speech in Gunsan, which is near Saemangeum.

Saemangeum is 409 square kilometers (157.9 square miles) in size and is one of the largest land reclamation projects in history. Work first started on the project in the 1970s.

Moon said investing in renewable energy was a “new-growth industry” that would “open up the future” and “ensure the safety of the people,” an apparent jab at the potential dangers of nuclear energy, which he has pledged to wean Korea off of.

The state-run Saemangeum Development and Investment Agency reported in a press release that a solar panel plant with a capacity of 3 gigawatts would be constructed by 2022 and an offshore wind energy complex capable of producing 1 gigawatt by 2026.

The 3-gigawatt-solar farm will be built on 38.29 square kilometers of land, according to the government, or 9.36 percent of the total size of Saemangeum.

“The world has already entered an era of renewable energy,” he continued. “As of last year, the ratio of renewable energy produced by members of the OECD [Organization for Economic Co-operation and Development] was 25 percent [of their total electricity power supply].” He said 73 percent of new energy complexes constructed by OECD member states last year were for renewable energy.

The Saemangeum development agency said it will attract private investment of 10 trillion won ($8.7 billion) for the construction of the Saemangeum renewable energy cluster and estimated it would create 100,000 new jobs.

The North Jeolla region has been struggling economically in recent years, due to a protracted slump in the shipbuilding industry, which is a major pillar of the economy along the west coast. In February, General Motors decided to close its Gunsan assembly plant.

Moon touched on the issue of reviving the local economy through a renewable energy project, saying, “New jobs and benefits coming from the development project should contribute to increasing locals’ incomes. I hope this project will become a model case in which local residents take part and prosper together.”

In its 3020 renewable energy project, the Moon government has committed itself to weaning the country off nuclear power with the number of reactors reduced to 14 from the current 24 by 2038. If the policy is sustained, the Shin Kori 6, scheduled for completion by 2022, will be the last reactor standing when it reaches the end of its life cycle in 2082.

The 3020 project’s name is based on Moon’s ambition to raise the ratio of electric power generated by renewable energy sources to 20 percent of the country’s total power supply by 2030.