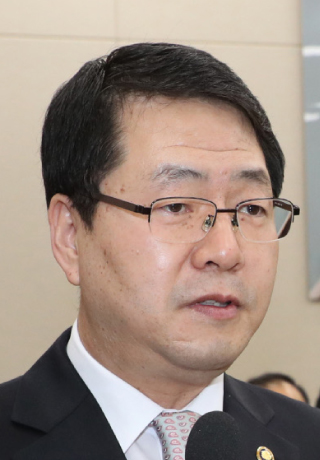 Kang Jung-min, the head of the Nuclear Safety and Security Commission (NSSC), resigned just hours before he was scheduled to appear before lawmakers for a parliamentary audit Monday, drawing criticism from lawmakers that he stepped down to avoid scrutiny of his alleged misconduct.

Kang, who was appointed to lead the state-run nuclear safety commission in January, tendered his resignation on Monday, when he was scheduled to attend an audit by the National Assembly’s Science and ICT committee. The Ministry of Personnel Management accepted his resignation immediately, ending Kang’s tenure just 10 months into his three-year term.

Kang was expected to be grilled by lawmakers over an allegation that he received 6.7 million won ($5,878) from the Korea Atomic Energy Research Institute in 2015 in research funds when he was a professor of nuclear engineering at Korea Advanced Institute of Science and Technology in Daejeon. The NSSC’s internal regulations prohibit members from receiving funds from nuclear-related organizations within the last three years.

Kang’s sudden resignation came after he announced on Oct. 12 that he would await the outcome of a probe by the Board of Audit and Inspection over his alleged wrongdoing. Opposition parties said the issue should disqualify him from the post.

His resignation was heavily criticized by lawmakers across party lines. Many said he chose to quit his job to avoid being questioned by them in a display of “irresponsibility” and “disregard for the National Assembly.”

“This is not a partisan issue but one between the administration and the National Assembly. Resigning just because he didn’t want to be questioned in a parliamentary audit is just an act of disregard for the Assembly,” said Rhee Cheol-hee of the ruling Democratic Party. Rep. Jeong Yong-ki of the main opposition Liberty Korea Party suspected that Kang avoided the parliamentary appearance because he gave false testimonies to committee members during his previous audit hearings.

Rep. Shin Yong-hyeon of the minor opposition Bareunmirae Party joined the chorus of criticisms, saying it was “unprecedented for a vice minister-level official to tender his resignation on the day of the parliamentary audit.”

“We need to hold Kang accountable for his irresponsibility,” Shin demanded. When reached by phone by the JoongAng Ilbo on Monday, Kang said he had “nothing to say.”