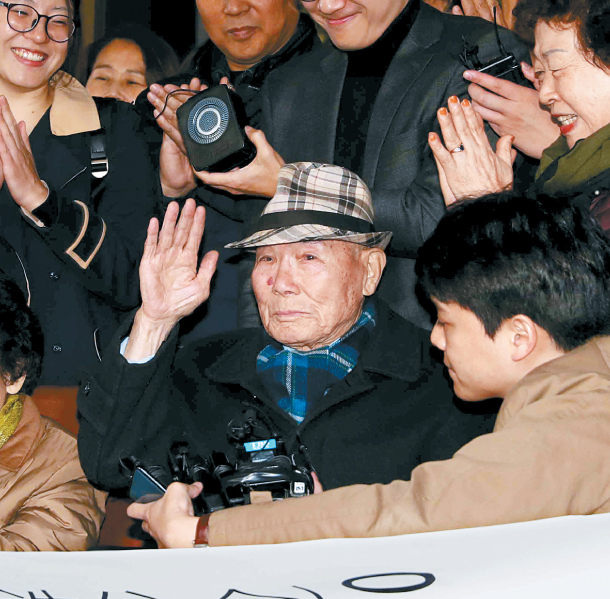 Lee Chun-sik, 94, the only survivor among four Korean laborers who filed suit against a Japanese steel company for unpaid wages during Japan’s colonization of the Korean Peninsula in the early 20th century, waves to the media in Seoul on Tuesday after Korea’s Supreme Court ruled in favor of the plaintiffs, ordering the company to pay 100 million won (＄87,720) to each. Tokyo protested the decision. [KIM SANG-SEON]

Korea’s Supreme Court upheld a lower court’s ruling Tuesday ordering a Japanese steel company to compensate four Koreans who were forced into labor during Japan’s colonization of the Korean Peninsula in the early 20th century.

The ruling is expected to drive another wedge between the Asian neighbors while opening the door for other Korean victims to ask for unpaid wages more than 70 years after their conscription.

The ruling could fundamentally reverse the legal foundation of friendly and cooperative relations between the two countries, Japan’s top envoy warned.

Nippon Steel & Sumitomo Metal, the Japanese steel company that was ordered by Seoul to pay up, said Tuesday’s ruling was “regrettable” and promised appropriate action after examining it.

Seoul’s Prime Minister Lee Nak-yon said Tuesday that the government “respects” the Supreme Court ruling and that he, alongside “relevant ministries and civilian experts,” will review overall matters regarding the decision and devise the government’s “countermeasures.”

Lee said he felt “sorry for the pain victims of forced labor had to go through” and said local authorities would try to “heal their wounds.” On Seoul-Tokyo relations, the prime minister said he hoped bilateral ties “develop future-orientedly.”

The Supreme Court ordered Japan’s Nippon Steel & Sumitomo Metal to pay 100 million won ($87,720) in compensation to each of the four workers, only one of whom remains alive. The plaintiffs claimed they went to Japan between 1941 and 1943 after recruiters from the company’s forerunner, Japan Iron & Steel, promised satisfactory food, wages, technical training and job stability.

But when they arrived, they were forced to work with no freedom and no wages for years. The victims said they returned home after the Korean Peninsula was freed from Japanese colonial rule, which lasted from 1910 to 1945.

The legal battle began in 1997 when two former South Korean laborers filed a compensation suit against the Japanese company with the Osaka District Court. They lost the trial. Japan’s higher court upheld that ruling in 2003.

The plaintiffs, along with two other South Korean laborers, took the case to the South Korean justice system by filing similar suits in the Seoul Central District Court in 2005.

Their suits were rejected by the district and high courts, which cited the 1965 treaty signed between both countries during Seoul’s Park Chung Hee leadership as evidence that they had no claims.

The treaty that led to the establishment of diplomatic ties, the courts said, relinquished reparations for individuals in return for a lump-sum settlement with Japan.

The Supreme Court’s ruling on Tuesday came five years and two months after it received the case. Kim Ki-choon, chief of staff for former President Park Geun-hye, told prosecutors in August that Park ordered her aides in the winter of 2013 to pressure the judiciary to delay trials for lawsuits involving Japanese companies and Korean victims of forced labor in order to improve relations with Tokyo. Park was president from February 2013 to March 2017.

The Supreme Court said Tuesday that the 1965 treaty doesn’t cover the plaintiffs’ right to seek compensation and that Nippon Steel & Sumitomo Metal was, in legal terms, basically the same company as its forerunner, which means it has the responsibility to pay for damages.

The court also said that the Japanese court’s ruling wasn’t valid in South Korea because it went against the country’s “good customs and social order.”