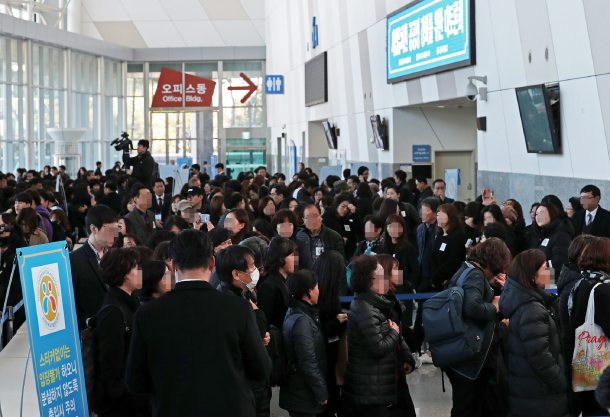 Members of the Korea Kindergarten Association convene for an emergency conference at the Kintex Exhibition Center in Goyang, Gyeonggi, on Tuesday. The organization asked its members to wear black to protest the government’s plan to expand its role in preschool education. [NEWS1]

An ongoing conflict between the government and private kindergartens reached a boiling point on Tuesday as school administrators held a massive gathering to decry the Education Ministry’s plan to overhaul early childhood education.

The Korea Kindergarten Association (KKA), a federation that represents private preschools nationwide, hosted what it called “a mass debate to strengthen the public accountability of private kindergartens” at the Kintex Exhibition Center in Goyang, Gyeonggi, on Tuesday. A majority of its approximately 3,000 members from across the country attended the event.

The organization asked its members to wear all black to the event to protest the government’s plan to expand its role in kindergarten education, which was announced last Friday.

The plan, which included raising the share of children in public preschools to 40 percent by 2021, was announced after an Education Ministry audit found rampant misuse of public funds at private kindergartens.

Administrators of private kindergartens cried foul over the plan. They are particularly opposed to implementing a state-run accounting program that the government says all kindergartens need to adopt.

The gathering’s proceedings were not open to the press. Contracted security guards stood by the entrances to the conference hall to prevent journalists from approaching attendees. This guarded behavior suggested caution on the part of private school administrators, following fierce backlash from parents and the public after the schools’ fraud was reported by the press.

Some administrators appeared unable to contain their anger at the state, telling reporters that the government was making all of them look corrupt with their audit results and reform plans.

This assembly on Tuesday was only the latest in a series of actions undertaken by the association to oppose the government. On Oct. 5, the group boycotted a public discussion hosted by the Education Ministry on corruption at private kindergartens, which eventually forced authorities to call it off. Several administrators even shut down their schools altogether without warning, leaving dozens of children idle and parents scrambling to find new facilities for their children.

A spokesman for the KKA hinted at even more drastic measures if the government does not reevaluate its plan. “This debate is designed to understand the opinions of private kindergarten administrators,” he said in response to a question about a coordinated shutdown of many private preschools nationwide. “Whether there will be such an action is up to each school to decide.”

The government, for its part, held its own inter-ministry conference at the Government Complex Seoul on Tuesday to discuss ways to accommodate children affected by the recent kindergarten shutdowns and a long-term plan to add more public preschools.

In attendance was the minister of health and welfare, the deputy minister of interior and safety, the chairman of the Fair Trade Commission (FTC) and a deputy at the National Tax Service. The Health Ministry will be tasked with distributing the children left school-less due to shutdowns to public schools nearby. The FTC will be called to investigate the legality of unilateral mass shutdowns by private preschools, according to a briefing on the meeting released last Thursday. The Interior Ministry will look into plans to build more public kindergartens, which are to be staffed by teachers on a public payroll managed by the National Tax Service.

Public preschools are in high demand in Korea, as they are cheaper than private options and are subject to strict oversight. Most are already overcrowded, and parents across the country have long been calling for more to be established.

Parents have not remained idle amid this mushrooming crisis. Also on Tuesday, a civic organization representing the parents of kindergarteners filed a complaint against the KKA with the Prosecutors’ Office, claiming that the organization obstructed its duty to the public for the sake of private gain.