At age 17, Lee Kang-in of Valencia CF became the youngest Korean football player ever to debut in a European league match, during the first leg of the Copa del Ray round of 32 against CD Ebro at Estadio La Romareda in Zaragoza, Spain, on Tuesday. 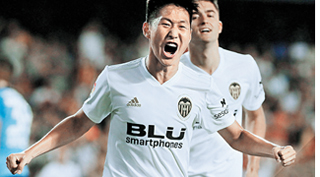 Lee Kang-in of Valencia CF celebrates after scoring his first goal during a pre-season match against Bayer 04 Leverkusen on Aug. 12. [VALENCIA CF]

Valencia won the match 2-1. Lee was assigned as a starting midfielder in the match and played a total of 83 minutes. Lee left the field in the 128th minute, and was substituted with Alexis Sanchez.

Prior to Lee, Nam Tae-hee held the record as the youngest Korean player to make his debut in a European league match, at age 18, while playing for Valenciennes FC of the French Ligue 1 in 2009. Lee is also the first Asian football player to play for Valencia’s top division team.

Lee made his first public appearance in season three of the KBS TV program “Shooting Kid” in 2007. The gifted youngster was only seven at the time and was labeled a football prodigy. Hailing from the port city of Incheon, Lee entered the youth academy at Incheon United before moving to Spain in 2011 with his family and was accepted into Valencia’s youth academy.

Lee has been moving up the ranks at Valencia very quickly. In July 2017, Lee was promoted to the Juvenile A team and then in January this year, he was offered a professional contract and promoted to the Valencia B team.

During the 2017-18 season, the 17-year old attacking-midfielder played 11 matches in Spain’s Segunda Division B league and scored one goal. But that was only the beginning. Prior to the beginning of this season, in July, the club announced the renewal of their contract with Lee.

Lee signed a four-year contract with a termination clause of 80 million euros ($90 million). Lee’s buyout was the second highest among Valencia’s U-19 players.

After completing Valencia first team pre-season training camp, Lee was promptly called up to the top team and made his debut for the club on July 25, during a pre-season friendly against Swiss side’s FC Lausanne-Sport.

Then in August, during another pre-season match against Bayer 04 Leverkusen, a German football club, Lee scored his first goal with the club. As both matches were pre-season, they are considered unofficial records.

His development at the Valencia CF youth academy is reminiscent of two other young Korean stars - Paik Seung-ho and Lee Seung-woo. Paik and Lee Seung-woo both rose through the ranks of FC Barcelona’s youth system and have begun to carve out careers in European football. After the U-20 World Cup last year, both players left Barcelona. Paik now plays for Girona FC and Lee plays for Hellas Verona.

Aside from Lee’s career in the European league, he has also been a crucial member of the Korean U-19 national football team and is likely to be the leading midfielder for Korea at the FIFA U-20 World Cup in Poland next year.