Sands says he’s trying to move on after tense confrontation

Sands says he’s trying to move on after tense confrontation 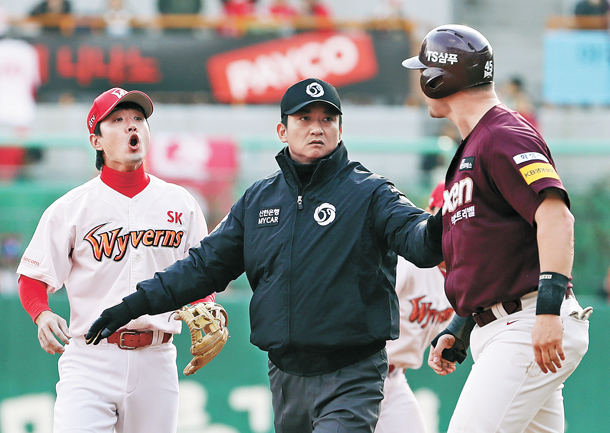 An umpire tries to separate Jerry Sands of the Nexen Heroes, right, and Kim Sung-hyun of the SK Wyverns during a bench-clearing confrontation in the top of third inning of Game 3 of the KBO playoffs at Munhak Baseball Stadium in Incheon on Sunday. [YONHAP]

Nexen Heroes’ outfielder Jerry Sands is trying to move on from a bench-clearing confrontation triggered by his hard slide during a Korean postseason baseball game last weekend, saying on Tuesday that he wasn’t interested in rehashing the details.

The incident occurred when the Heroes were playing the SK Wyverns in Game 2 of the second round in the Korea Baseball Organization (KBO) postseason on Sunday at SK Happy Dream Park in Incheon, just west of Seoul, and Sands tried to break up a double play in the top of the third inning.

Sands slid hard into second baseman Kang Seung-ho, who nevertheless made a throw to first to complete the double.

In the aftermath, some SK players exchanged words with Sands, and shortstop Kim Sung-hyun was caught on camera giving Sands the finger.

The Wyverns won the game 5-1 to take a 2-0 series lead, and their players said afterward that Sands provoked them by swearing.

Asked before Game 3 on Tuesday if he had anything to say to clarify the situation, Sands simply said, “It’s over for me.”

“Whatever’s said on the field, I’d like to keep it on the field,” Sands said at Gocheok Sky Dome in Seoul. “It was a hard slide. I’ve always been taught to break up a double play. I am not sure what they said, and they probably don’t know what I said. It was just a hard play and both teams were competitive out there. It’s no big deal to me.”

Benches have cleared in each of the first two games in this series. In Saturday’s Game 1, SK third baseman Choi Jeong took exception to a high inside pitch from Nexen starter Jake Brigham and flung the bat toward the mound in anger.

Sands said Choi’s action was “obviously a big deal” but he said he wasn’t sure why the benches cleared after his slide on Sunday.

“I feel like there’s got to be a pretty big altercation for the benches to clear,” he said. “I think it was a pretty quick trigger for everyone to come out. I could tell they didn’t like the slide. But it was just two heated guys running their mouths, trying to win a championship.”

Sands added he doesn’t expect any retribution or retaliation from the Wyverns in the form of a pitch thrown at him.

“I don’t think I was in the wrong [about the slide],” he said. “If they hit me, they hit me. I am not going to run out there after them.”

Also on Tuesday, Kim Sung-hyun, who received a warning from the KBO for his action, apologized for what happened in Game 2.

“I did something I shouldn’t have done,” Kim told reporters. “It happened in the heat of the moment. We all talked about keeping our cool from now on.”