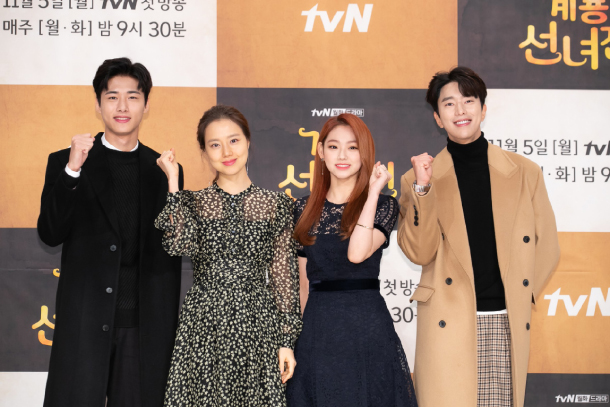 From left to right are actors Seo Ji-hoon, Moon Chae-won, Mina and Yoon Hyun-min, who will appear in romance fantasy drama “Mama Fairy and the Woodcutter.” The first episode will air on tvN this Friday. [TVN]

The long-awaited television series based on the web comic sensation “Mama Fairy and the Woodcutter” hits the air this Friday on tvN.

A heart-warming story based on a well-known folk tale about a fairy who fails to return to the world she belongs to after a woodcutter hides her fairy clothes, the upcoming drama revolves around a fairy named Sun Ok-nam (Moon Chae-won), who has been forced to stay in this world after her woodcutter husband dies without telling her where he hid her fairy clothes.

“I was charmed by the web comic because it is a special tale about discovering the fate of people,” said producer Kim Yun-chul during a press event held in Yeongdeungpo, western Seoul, on Tuesday. “Since the original shows warm characters, I thought it could warm people’s hearts when they see the story [on television.]

Unlike the original tale, which deals with the profound theme of fate and destiny, the upcoming drama takes on a much lighter tone, like a sitcom,” Kim explained about the challenges he has faced while working on the fantasy romance drama.

Since her husband’s passing, Ok-nam has been striving to find her fairy clothes, without much success.

Starting in the Goryeo Dynasty (918-1392), Ok-nam has been in search of her clothes for centuries. After years of futile efforts, she begins to believe that the only way to locate her fairy clothes is to wait for her husband’s reincarnation. 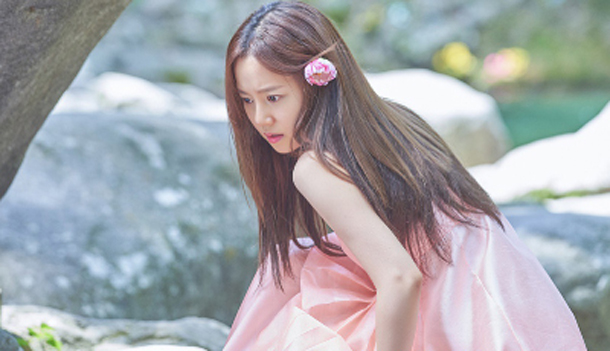 In the present day, after 699 years of searching, she spends her time working as a barista at a cafe on Gyeryong Mountain, until one day she encounters two men who she believes could be her reincarnated husband. Feeling confused between the two, Ok-nam follows the pair as they return to Seoul.

To most people, Ok-nam appears as an average yet funky grandmother, played by veteran actor Go Doo-shim, but those who are connected to her by fate see her as her younger self (Moon).

For Moon, who has long desired to play a lighter role, the upcoming series was an ideal choice.

“I personally like sitcoms, and I have always hoped to play a role in the genre,” said Moon at the press event. “After the gradual drop in the genre’s supply, I still hoped to take part in a fun and lighter piece,” she said referring to “Mama Fairy and the Woodcutter.”

Moon added, “Even among good and fun dramas, some series leave audiences feeling stressed while and after watching due to the heavy topic or emotions. But ‘Mama Fairy and the Woodcutter’ will be a fun and light drama that people can watch without feeling much pressure.”