A Chimera is not just a myth

A Chimera is not just a myth 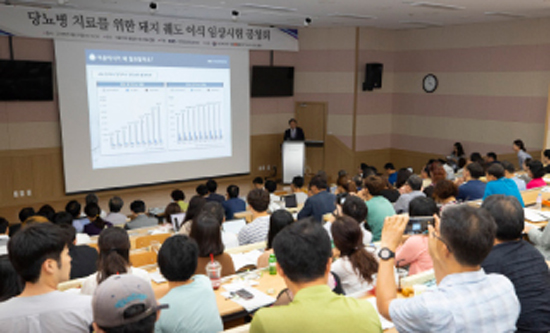 A public hearing for the results of transplanting a pig’s pancreatic duct into humans to treat diabetes is held at Seoul National University Medical School in August. [YONHAP]

In ancient medicine, the animal closest to humans was the pig. Since it was banned to dissect dead bodies, pigs were used to study anatomy as the organ functions and structures were considered to be closest to humans. Anatomy developed by Galen, the “emperor of medicine” in 2nd century Rome, continued until the 1500s.

It is not absurd. In 2012, researchers from an international consortium completed a map of the swine genome. It showed that 95 percent of the genes determining tissue and organ shapes for humans and pigs are similar. Genetic variations for obesity, diabetes, Parkinson disease and Alzheimer’s disease are the same. Also, the publication of the genome map of a pig states that humans and pigs diverged from the same ancestors 80 million years ago. It coincides with the breeding of pigs and origin of humanity in Bernard Werber’s “Father of Our Fathers.”

The attempt to grow human organs on pigs has moved one step closer to realization. A few days ago, the Japanese government approved research to put a so-called chimera embryo that combines human iPS cells with a fertilized pig egg in a pig’s uterus. Japan practically opened the door for the creation of a human-pig chimera, with human organs. In genetics, a chimera is a single organism made up of cells from two different sets of DNA. The name is derived from the Chimera, a creature in Greek mythology with the head of a lion, the body of a goat and the tale of a snake.

To patients and families waiting for organ transplants, human-swine chimeras may offer a glimmer of hope. But ethical controversy and uncertainty still exist. It is concerning as there is a possibility that organisms that are hard to categorize between humans and animals could be born due to errors in the course of growing a chimera embryo. Tokyo restricted transplanting chimera embryos to human wombs and breeding chimeras. In Korea, research into putting human stem cells into an animal embryo is banned.

Myths are the product of imagination. Both in the East and the West, half-human half-monster creatures never failed to appear, notably Niutou, or Ox Head, in Chinese mythology and the Centaur in Greek mythology. Half-human, half-animal creatures are feared yet symbolize divinity and abundance. The human-swine chimera in the future should be a symbol of life and hope. It should not be a monster. I hope my worries on the progress in chimera research are unfounded.