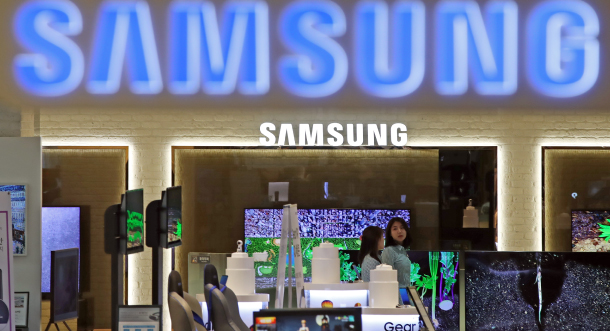 Samsung Electronics posted a record operating profit for the third quarter, the company announced on Wednesday, thanks to a supercycle in the semiconductor business.

It was the 11th-straight quarter of record operating profit for Samsung’s semiconductor division.

In an earnings report Wednesday, the company announced operating profit for the company in the quarter ending in September rose 20.9 percent year on year to reach 17.57 trillion won ($15.42 billion).

Revenue rose 5.5 percent to 65.46 trillion won in the same period on the back of strong sales of memory products and organic light-emitting diode (OLED) panels. That figure fell slightly short of the record 65.98 trillion won reported in the fourth quarter of 2017.

Memory chips were the biggest contributors to the upbeat performance of the semiconductor division. Overall demand for NAND flash and dynamic random-access memory (DRAM) chips increased for servers and mobile devices, Samsung explained. Robust demand for higher density products for servers and mobile devices propelled NAND sales, whereas new product launches during the third quarter and a trend toward higher densities for smartphones pushed sales of DRAMs.

Despite fears that the supercycle in the chip industry of the past two years is nearing its end, Samsung expects earnings growth to continue in 2019, bolstered by rising demand for image sensors used in more sophisticated camera specifications.

“The memory market may slow down in the first quarter due to seasonal effects, but supply and demand dynamics are forecast to stabilize from the second quarter thanks to increase in overall demand, mainly from servers and mobile,” the company said in an earnings release. “Samsung will solidify its technology leadership by expanding sales of differentiated products.” 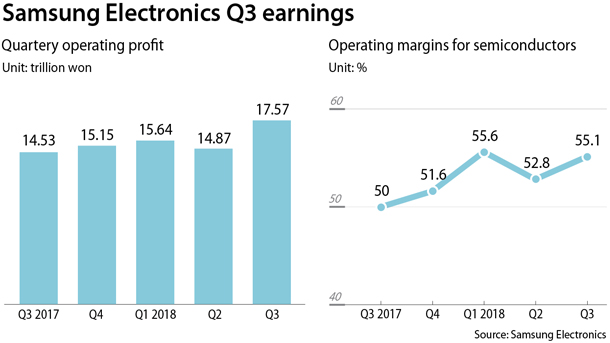 The IT and mobile communications division saw gloomy results, however. Operating profit for the division tumbled 29.8 percent year on year to 2.22 trillion won. Samsung blamed increased promotional costs and a negative currency impact. Revenue slid 10 percent to 24.91 trillion won over the same period.

Operating profit from mobile phones at Samsung was merely one-sixth of semiconductors in the third quarter. The operating margin for the IM division was only 8.9 percent.

“Although Samsung achieved solid sales of flagship models in the [third] quarter, its total smartphone shipments remained flat due to decreased sales of mid- to low-end products,” the company said.

Robert Yi, executive vice president for investor relations, said in a conference call Wednesday morning that Samsung sold 81 million smartphones in the third quarter. That figure was down from 85 million sold in the same period a year ago, despite the launch of the Galaxy Note9 in August.

Yi noted that a Samsung Developer Conference scheduled for Nov. 7-8 in San Francisco will showcase the upcoming foldable phones Samsung has been developing with a new user interface.

“Foldable smartphones are set to perfectly combine portability and a large screen experience through an innovative form factor,” he said, “offering a multitasking environment.”

He refused to give a detailed schedule for the launch of the new foldable phones.

Samsung Electronics shares closed 0.12 percent higher at 42,400 won on Wednesday. Brokerage houses’ target price for the shares ranges between 55,000 won and 70,000 won. Separately, Samsung Vice Chairman Lee Jae-yong vowed to beef up its business and investment in Vietnam during a visit to the country on Wednesday.

“We will continue with long-term investment in Vietnam and expand our business,” said Lee in a meeting with Vietnamese Prime Minister Nguyen Xuan Phuc.