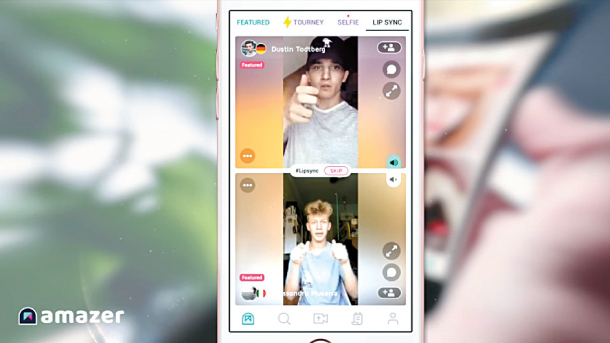 Amazer is an interactive K-pop video app where users upload videos of themselves dancing or lip syncing to K-pop music. [AMAZER]

Korean video service providers are finding success abroad on the back of global interest in Korean culture and advanced technology.

The Korean Wave, or Hallyu, is lending a big helping hand to video creators looking for fans outside Korea.

It mostly released cooking videos of common dishes like fried chicken and bibimbap. Each clip generally lasts about a minute.

“We followed the strategy of producing high-quality videos of food that will appeal to teens and young adults across the world,” said Cookat CEO Lee Mun-ju.

Amazer is a video platform app that’s hoping to cash in on the popularity of K-pop.

The app allows users to upload 15-to-20-second-long videos of them dancing or lip syncing to K-pop songs. They can rise to in-app fame by doing well in “battles,” where other users have to choose between two videos on a split-screen display and “swipe right” to vote their favorite.

Nine out of 10 Amazer users are teens overseas, including from North America and European countries like Germany and Poland.

Domestic start-up Hyperconnect launched Azar, a chat app that connects complete strangers across the globe through video calls, in late 2013.

Azar has over 200 million downloads across 230 countries and processes over 60 million video calls every day. Hyperconnect recorded 46.4 billion won ($40.75 million) in sales just in the first half of this year, making it one of the highest-grossing non-gaming apps on Google Play. Last year, it recorded 62.4 billion won in annual revenue.

Sales come from in-app “gem” purchases that users need to select the gender or country of the people they want to meet. Some 90 percent of Azar’s sales are made overseas.

AmazeVR is a popular virtual reality (VR) video content provider founded by Korean entrepreneurs in Silicon Valley, including former Kakao developers. The company hosts and produces interactive VR videos and movies for owners of VR headsets like Samsung’s Gear VR and Oculus devices. Over 100,000 users have downloaded AmazeVR’s Android mobile app, with many of them hailing from the United States, where more people own VR equipment.