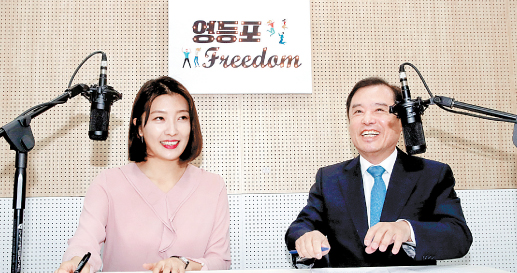 Kim Byung-joon, right, interim chief of the conservative opposition Liberty Korea Party (LKP), appears at a video shoot for the party’s YouTube channel on Oct. 11 at Yeongdeungpo Freedom, a studio in western Seoul where the LKP films YouTube clips and records podcasts. [YONHAP]

Conservative lawmakers and critics are struggling to make their voices heard on mainstream media under the liberal administration, and many have turned to YouTube to vent their frustration about President Moon Jae-in and his policies.

The main opposition Liberty Korea Party (LKP) has nearly 27,000 followers on its official YouTube channel, about triple that of the ruling Democratic Party’s (DP). LKP Rep. Jun Hee-kyung’s personal YouTube channel is followed by some 35,000 people, while Rep. Lee Un-ju of the minor opposition Bareunmirae Party has 26,000 YouTube followers. No DP lawmaker has as many followers as these conservatives.

In a country where TV broadcasters usually air programs that favor the current government, whether right or left wing, the DP knows all too well the way social media works. In 2009, during the conservative Lee Myung-bak presidency, many liberal lawmakers relied on Twitter to communicate with supporters. Lawmakers on the Grand National Party, predecessor to the LKP, complained how they were being bashed by critics of the Lee administration on Twitter and that the trend was making it hard for them to use the social network.

Many DP lawmakers still rely on Twitter today. Among the 129 DP representatives, 91 (71 percent) have a Twitter account. Of the 112 lawmakers in the LKP, only 47 (42 percent) use Twitter. The combined number of Twitter followers that DP lawmakers have is about 5.5 million, much higher than the LKP, which has 474,700.

“Korean society is really sensitive to political issues,” said Park Sung-hee, professor of communication and media at Ewha Womans University in Seoul. “When there’s a new telecommunication medium, [people] use it as a tool to have their political voices heard.”

Park continued that new forms of media tend to attract politicians because they can relay their thoughts without having to filter them.

Prof. Eom Tae-seok of Seowon University in Cheongju, North Chungcheong, said it was inevitable that supporters of opposition lawmakers follow their favorite politicians to new media platforms, because Korea’s mainstream media usually air content in line with the government.

LKP lawmakers are now accusing the Moon administration of trying to restrict their activities on YouTube. After Prime Minister Lee Nak-yon declared war on “fake news” early last month, government agencies have been compiling a report on countermeasures it could take to combat fake news. The release date for the report has not yet been announced. The DP thinks YouTube should be covered by the country’s Telecommunication Act, making the medium fall under those countermeasures.

Rep. Park Sung-joong of the LKP said past conservative administrations have never regulated Twitter when progressive lawmakers used it, and accused the Moon Blue House of blocking the free flow of public opinion.