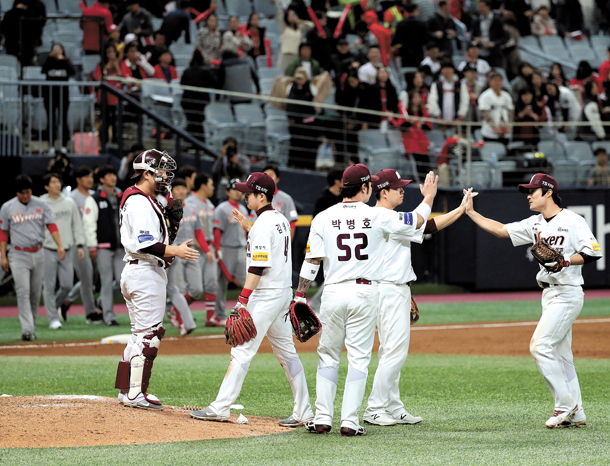 The Nexen Heroes celebrate after defeating the SK Wyverns 4-2 during Game 4 of the second round of the KBO playoffs at the Gocheok Sky Dome in western Seoul on Wednesday. [YONHAP]

With two straight wins at the Gocheok Sky Dome in western Seoul, the Nexen Heroes have managed to claw their way back into the second round of playoffs, a feat that seemed impossible just three days ago.

When the Nexen Heroes started the playoff series with two straight losses to the SK Wyverns in Incheon, it seemed like an absolute certainty that the west Seoul club would be going home early. But once the Heroes got back on their own turf, things started to look very different.

The Heroes now enter the final game of the series tonight - the game that will decide who makes it to the Korean Series - on the back of a two-game streak, while the Wyverns have to try and rally from two straight losses. If the Heroes win, they will become the fifth team in KBO history to complete a reverse sweep in the playoffs.

If the Heroes advance to the Korean Series, this will be the first time since 2014 that they have made it to the final. If the Wyverns win, it will be their first appearance since 2012.

On Wednesday, the Heroes defeated the Wyverns 4-2 to square the playoff record to 2-2.

In a must-win game, the Heroes once again made an aggressive choice for starting pitcher - 19-year-old Lee Seung-ho. Although Lee got off to a shaky start by giving up a walk to the first two batters, it didn’t take long for him to find his nerve again. In four innings, Lee gave up just one hit, five walks and no runs.

An Woo-jin once again stepped up as the Heroes relief pitcher to pick up a win by tossing four scoreless innings.

Wyverns’ starter Moon Seung-won got off to a strong start, throwing three scoreless innings. But that was the end of his luck. At the bottom of the fourth inning, while the count was at one out, Moon gave up a walk to Park Byung-ho. Jerry Sands followed with a two-run homer to allow the Heroes to take the lead.

Sands returned in the sixth inning, getting a base hit to give the Heroes runners on first and third base. A risky bunt from Lim Byeong-wuk came next, and as Wyverns third baseman Na Joo-hwan lost his footing, Seo Geon-chang was able to make it home unchecked.

A hit from Kim Ha-seong saw the Heroes get one more to round off the inning, taking the score to 4-0.

The Wyverns’ Han Dong-min responded with a two-run home run at the top of ninth, but it was too little too late for the Wyverns. Heroes closer Kim Sang-su got the last two outs to finish the game 4-2.

“We’re pleased to get this one and force Game 5,” Heroes manager Jang Jung-seok was quoted as saying on Yonhap. “We’re going to work hard to get ready for that game and leave nothing on the field.”

At bat, the Heroes’ Sands exploded with a perfect batting average for the day, good enough to be named MVP. In Game 4, the Heroes had five hits, four of them by Sands.

“This feels good,” Sands was quoted as saying. “It’s great to get a win, and we’re going to Game 5 with a little bit of momentum. Some days, the team’s going to get 10 hits and I’ll get none. We won the game and that’s all that matters.”

In postseason games, the Heroes are yet to see much action from slugger Park Byung-ho, as he has a .071 batting average with one hit and a run in four playoff games against the Wyverns.

For the Wyverns, another loss has shown the team’s strong reliance on home runs. In four playoff games, the Wyverns have scored 19 runs, 16 of them from homers.

In Game 5 the Heroes will start Jake Brigham while the Wyverns will start Kim Kwang-hyun. The last game will start at 6:30 p.m. at Munhak Baseball Stadium in Incheon today.