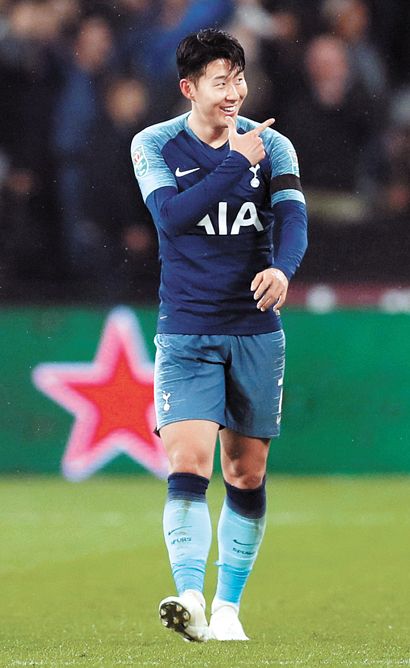 Son Heung-min of Tottenham Hotspur celebrates after scoring his second goal of the match against West Ham United in London Stadium on Wednesday. [REUTERS/YONHAP]

Son grabbed a brace in Tottenham’s 3-1 win over West Ham in the fourth round of the Carabao Cup at London Stadium in London on Wednesday. It was Son’s first two goals in 10 matches in the 2018-19 season.

Son had not scored in five English Premier League (EPL) appearances, three UEFA Champions League contests and one Carabao Cup match prior to the duel against West Ham.

The 26-year-old Korean has had a busy international schedule as he took part in the 2018 FIFA World Cup and the 18th Asian Games in Indonesia, where he won a gold medal. He also played in Korea’s four friendly matches under new head coach Paulo Bento after the Asian Games.

In his 150th match for Tottenham, the club he joined in August 2015, Son started as a winger supporting striker Fernando Llorente. He scored his first goal of the season in the 16th minute with his left foot following a pass from Dele Alli. Son then doubled the lead for the London club in the 54th when his left-footed strike also hit the net.

West Ham later cut the deficit to one with Lucas Perez’s header in the 71st, but Llorente secured the Spurs’ spot in the domestic league cup quarterfinals with his goal in the 75th.

“I think the most important thing is that we won,” Son said in a post-match interview with Spurs TV. “We’re in the next round and finally, I scored.”

Tottenham will face their London rivals Arsenal in the quarterfinals in December.