Exports keep surging as other parts of economy wobble

Exports keep surging as other parts of economy wobble

Korea’s exports were the second-largest ever last month - and exports in the first 10 months hit a record high for that period. 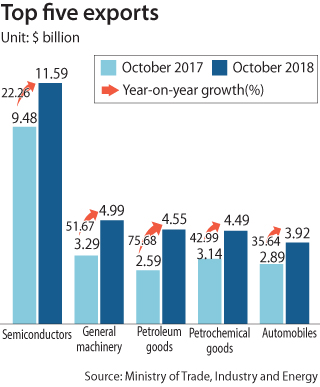 So while the employment situation continues to disappoint and the stock market suffers steep losses - forcing many institutions to lower their growth outlooks for this year - the economy’s main engine shows surprising strength.

According to the Ministry of Trade, Industry and Energy on Thursday, Korea’s exports grew 22.7 percent in October year on year to reach nearly $55 billion. The record high for a month was reached in September 2017 when exports amounted to $55.1 billion.

“We have been able to achieve the second-largest amount of monthly exports despite unfavorable conditions including the continuing trade conflict between the United States and China and expanding volatility in the global financial market,” Trade, Industry and Energy Minister Sung Yun-mo said Thursday. “While semiconductor exports grew, machinery and petrochemical exports reached an all-time record [in October], which proves Korea’s exports are maintaining strong growth.”

Semiconductor exports slowed compared to previous months, but grew 21.1 percent compared to the previous year to reach $11.6 billion. This brought exports of computer chips for the first 10 months to $100 billion. This was the sixth consecutive month that chip exports were more than $10 billion.

Semiconductors accounted for 21.1 percent of all exported goods.

Minister Sung, however, raised concerns about growing downward risks including expanding protectionism in major importing countries and the volatility of foreign exchange caused by interest rate hikes by the U.S. Federal Reserve.

The Trade Ministry said in a statement that it will employ every means possible against the downward risks including countering protectionism while diversifying export markets and exported categories.

Despite good news on exports, other areas of the economy are flashing red. According to Statistics Korea on Thursday, consumer price grew by the sharpest amounts in 13 months.

Last month, consumer price rose 2 percent compared to the same period last year. It is the sharpest growth since inflation was at 2.1 percent in September 2017.

The statistics agency said prices were driven up by higher petroleum prices resulting from rising international crude prices and more expensive agricultural products after a heat wave struck the peninsula this summer.

With inflation rising, there have been growing concerns as to whether Korea is now entering a state of stagflation.

“We’re in a situation where external risk factors are growing and the downward risks are enlarging,” Kim said. “So far we have discussed a lot about structural reforms, including reforming regulations, and it is time for the government and the political parties to make a brave decision.”

Kim said it is important not only to stimulate the economy and create jobs in the short term but also to expand growth potential.

The finance minister said that, as head of the country’s economic management, he is committed to government policies that boost the economy and create jobs as long as he is in charge.

While the Blue House denied the rumors, there have been reports in the local media that the mood within the Blue house is different than when such rumors first circulated.

“Why wouldn’t I want to take full responsibility [and resign] at this very moment?” Kim said. “But it is my duty to do all that I am responsible for, including budget reviews, until the time [for resignation] comes.”

The Korea Institute of Finance on Thursday released a gloomy outlook for next year indicating slower growth. The institution projected next year’s growth at 2.6 percent, 0.1 percentage points lower than this year’s 2.7 percent.