Healthy bakeries offer tasty desserts without the worry: People are lining up to try guilt-free vegan bread and cakes

Healthy bakeries offer tasty desserts without the worry: People are lining up to try guilt-free vegan bread and cakes 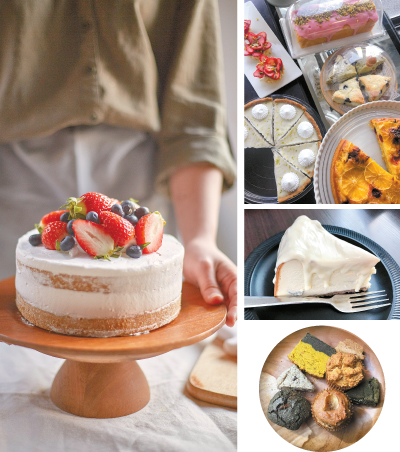 Following the rise in demand for healthier breads, a growing number of pastry shops that offer low-carb and flourless delicacies have popped up across Seoul. Clockwise from left are cakes from Sunnybread, Plant, Kyeri and muffins and scones from Wonde Raw. [SUNNYBREAD, PLANT, JIN MIN-JI, WONDE RAW]

A 10-minute walk from Itaewon station in central Seoul, down a steep hill and through a series of tight alleys stands the popular navy-blue pastry shop Kyeri. Just before 1 p.m. on a recent Thursday afternoon, a group of people had formed a line in front of the dessert cafe waiting for the shop to open. Considering Kyeri’s distance from other restaurants or cafes in the area, it was obvious that most of the people in that line had trekked there specifically to try out what the pastry shop had to offer.

As healthier pastry shops grow in popularity, Kyeri is adored by its customers for its creamy cakes that are less sugary, buttery and oily than cakes found at other dessert cafes.

“The cakes from Kyeri are a lot less sweet than the ones found at average cake shops,” a customer in her 20s said while waiting in line. “And, the cakes here are made with healthier ingredients,” she said with confidence.

In many ways, Kyeri is not the most customer-friendly pastry shop. For starters, it does not open until 1 p.m., and will not accept groups of more than three people. Along with its costly price - a single slice of cake costs around 9,500 won ($8.40) - there is a limited amount of time each customer is allowed to stay. After ordering a slice of gorgonzola cheese cake with white chocolate sauce, this reporter was allowed to stay for just a little more than 30 minutes.

Despite the inconveniences, there was a constant flow of people coming into the cafe looking to try a delicious, guilt-free dessert throughout the afternoon.

Depending on who you ask, the definition of what constitutes healthy bread varies. For those trying to lose weight, a less sugary pastry is their healthy choice, but those who cannot tolerate gluten or who are vegan would look for gluten-free or vegan bread options.

Regardless of their concerns, for most people, savoring a delicious, well-made piece of bread is a highly sought-after experience, helping them relieve the pressures of daily life.

Catering to the rising number of health conscious consumers - many of whom are willing to travel extra miles and spend more money to satisfy their tastes - bakeries that sell healthier breads have popped up all across Seoul. Backed by loyal customers, who voluntarily share videos and pictures of the pastries from these bake shops online, larger crowds are making their way to try what everyone is talking about.

Along with Kyeri, other well-known healthy bakeries, including Sunnybread and Plant, are also located in the Itaewon neighborhood.

Each of these healthy bakeries boasts its own specialty.

Wonde Raw, for instance, sells vegan scones, muffins and pound cakes - made without flour, eggs or dairy products - as well as various flavors of the store’s specialty kombucha, a fermented tea product that has become common on store shelves in the United States. Though still rare, kombucha is gradually being introduced into the Korean market.

With the goal of offering a healthy lifestyle to its customers, Wonde Raw also occasionally holds a yoga retreat, hosts book seminars to discuss issues on veganism and holds vegan baking classes.

Another bakery that sells vegan breads is YummyYomil in Mapo District, western Seoul. Frequently visited by both Korean and foreign customers, the bakery also offers vegan dishes like meatless burgers as well as vegan drinks, including home-made almond milk and soy milk.

Pan Honnesta, known for its flourless delicacies that taste like coconut, has expanded to several locations. In addition to a store in Yeonnam-dong, western Seoul, it has recently opened a new shop in Sinsa-dong, southern Seoul, and also frequently opens pop up stores in department stores.

“I noticed that many of my customers prioritize the value of bread over its taste,” said Song Sung-rye, the founder of Sunnybread. “I believe there has been a rise in interest towards what people put in their bodies.”

Song added, “I believe the opening of more and more new bakeries that sell healthier breads using healthier ingredients [instead of the standardized factory-manufactured breads] is proof of people’s growing demand for [more nutritious] bread.”