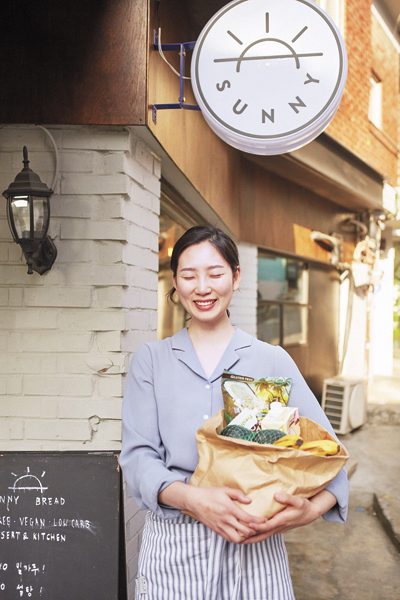 Flour, bread’s most basic ingredient, provides the food its soft and chewy texture. But, baker and recipe developer Song Sung-rye has proven that bread made without the addition of flour could be just as enjoyable to eat.

The 25-year-old founder of gluten-free pastry shop Sunnybread in Itaewon, central Seoul, started baking in middle school. Growing up in the United States, she spent her leisure time baking and never missed an episode of popular baking shows on television. Despite her love for baking bread, Song was never able to taste any of her baked goods due to severe reactions to gluten. All she could do was enjoy people savoring the bread she baked.

Eventually, Song started baking breads that did not contain flour so that she could also enjoy the fruits of her labor. It took her seven years of trial and error to finally make bread - made with alternative flours like almond and coconut flours - that people found delicious.

After returning to Korea to attend university, Song started to share her passion on her blog. Her posts on alternative baking were, to her surprise, very well-received by specific groups of people, such as parents with children who suffer from gluten intolerance as well as diabetic patients and people with skin issues like atopy.

“Through the unexpectedly positive response I got from my blog, I realized that there are many people who, for different reasons, cannot consume the breads sold at usual bakeries,” said Song. Upon request, she baked bread for a small number of her subscribers for free. But when demand skyrocketed, her readers suggested she start selling the bread she made.

Being able to bake for people with specific dietary needs has provided Song with a sense that she is doing something for the greater good.

“There have been many rewarding moments, but the most rewarding experience for me is when children who cannot tolerate gluten can have a birthday party with a cake, just like the rest of their friends,” Song said.

“Most people associate gluten-free with something premium, but we desperately want to be able to eat bread from any bakery on the streets.” Song added, “The fact that my breads are shared among people who understand their value and are consumed by those who really need them makes my job much more rewarding.”

To discuss her bakery’s origins, Song sat with the Korea JoongAng Daily for an interview on Oct. 25. The following are edited excerpts.

Q. You have expanded your baking methods from gluten-free to vegan and keto styles. Why is that?

A. The biggest reason is because I wanted to cater to a diverse range of people looking for different kinds of breads for a variety of reasons. I know how tough it is to not be able to eat what people commonly enjoy everyday. So I hoped to give those with limited options a little more freedom in what they eat.

Sunnybread is popular among health conscious consumers as well as those looking to lose weight. How many calories does your bread contain?

A piece of cake sold at a typical bakery contains around 500 calories. Ours, however, is almost half - between 200 to 250 calories. So other than those who eat our breads for health reasons, many people who are weight conscious like health trainers or celebrities visit our shop in search of low-carb breads.

There has been a sudden increase in the number of healthy bakeries over the past few years. How do you feel about the competition?

When I first opened the bakery, my goal was not to beat competitors, but to work hard to foster more competition. For me, I see myself more as a consumer than a seller because if there are more bakeries and restaurants that cater to the needs of consumers with limited food options like me, I will feel more welcomed wherever I go instead of being seen as a picky person. Also, I would feel a lot more relieved to raise children in Korea one day.

Your bakery has grown rapidly over a short period of time. At this point, are you thinking of opening other stores?

I do think about opening another store, but not at this point. There have been several requests to open another location, but I felt like they were trying to buy the idea of selling gluten-free, vegan and keto breads instead of sharing the values of our breads. Since many of our consumers are different from average people in what they can eat, trust is the most crucial element. So I’m being very careful about the idea of expanding until I meet the right person.