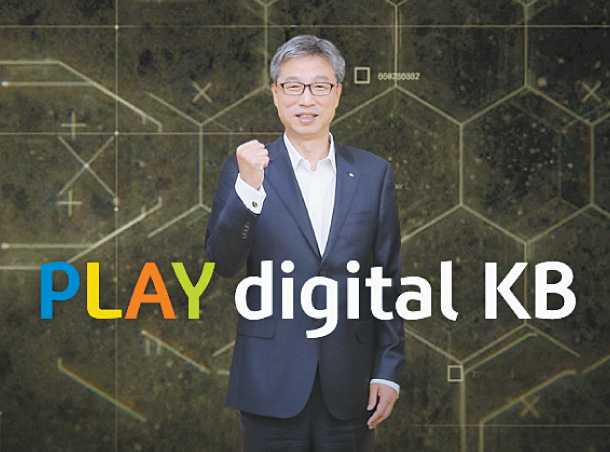 KB Kookmin Bank announced Thursday that it will spend 2 trillion won ($1.76 billion) on digitizing the workflow at the bank over the next seven years.

The bank will also train 4,000 digital experts to help it achieve its digitalization dreams.

“Digital is the new movement of the fourth industrial revolution, change is not a choice but our destiny,” Hur said. “In order to cultivate the majority of employees who understand the need for change into leaders for digital change, [we] will not hesitate to invest in and support various activities and training programs.”

He also unveiled a new corporate slogan, “PLAY Digital KB.” The P in PLAY stands for people-oriented; the L stands for leading digital transformation; the A for agile; and the Y for young KB.

The bank will pursue the transformation by prioritizing the reorganization of the entire work process at branches from a digital perspective. The digitization will be centered on artificial intelligence, blockchain, the cloud and data. A new IT innovation center will lead the development.

The bank also plans to introduce a “digital index” to check its employee’s level of participation in digitization.

During the event, which was broadcast live to the bank’s employees, Hur vowed to train them by letting them visit other digital players and encourage the creation of internal start-ups.

KB’s announcement comes as the financial industry has been stepping up efforts to integrate the latest technologies into their services.

Hana Financial Group announced Wednesday that it will transform into an information company. The group said it will train all its employees in computer programming from this year and increase the portion of new clients using digital channels from 20 percent to 40 percent.