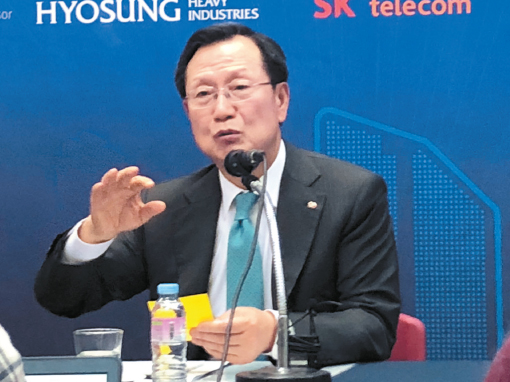 GWANGJU - The CEO of Korea Electric Power Corporation (Kepco) said it still hopes to be picked for a $20 billion nuclear power plant project in Saudi Arabia that is expected to be decided by the end of next year.

Kim Jong-kap, Kepco’s president, said the biggest factor in winning the bid will be how much localization the company can offer, including partnering with Saudi companies and hiring and training local workers.

“We are currently preparing materials that will show how much we could localize by the end of this year,” Kim said on Wednesday at the Bitgaram International Expo of Electric Power Technology (Bixpo), a three-day exhibition and forum hosted by the Korean power company.

“We are trying to show that we are working to become Saudi’s long-term partner,” Kim said

In July Korea was put on the shortlist for the Saudi nuclear project along with the U.S., China, Japan and Russia.

“It’s been 23 years since Kepco has been working on overseas projects,” Kim said. “Currently we are working on 43 projects in 26 countries.

“Whether it’s building power plants or power transmission and distribution, there’s not much for us to do here in Korea,” he added.

“Our power losses in power transmission and distribution are [only] 3.5 percent, which is one of the lowest rates in the world and our annual power blackouts are the lowest in the world. So we are trying to find new opportunities overseas in which we can offer our experience.”

Kim said earnings from overseas could make it easier for Kepco not to raise domestic electricity bills.

“Considering our 60 trillion won ($53 billion) in revenue, 3 or 4 trillion won [from overseas projects] may not seem like much, but even [Korean] conglomerates find it difficult to make that amount of revenue from overseas,” Kim said. “During Bixpo there have been quite a number of [foreigners] that have been hoping to find new business opportunities with us.”

He also raised the need to change Korea’s billing system for power use, and he urged the National Assembly to give its full cooperation.

In particular, Kepco wants to change the billing system to prevent large consumption of power at below its production cost.

He said in the last 40 years industrial power has been provided to companies below its production cost past midnight. Kim said until now this has benefited conglomerates greatly and therefore it is time to change the billing system so that more benefits go to SMEs while cutting back on consumption.

“Since the National Assembly has created a special energy committee, it should reach an agreement in coming up with a billing system that the public could agree on,” Kim said.

He stressed that changes are needed to reduce excessive consumption.

“While there have been many discussions at the National Assembly on what to do about our power supply - whether as nuclear power or renewable energy - it would be good to consider the demand side, including such issues as excessive use,” Kim said.

He said between 2006 and 2016, industrial energy consumption in major advanced countries including the United States, Germany, Denmark, Japan, UK, France and the Netherlands has been shrinking but in the same period, Korea’s consumption has grown 41 percent.

“Although I do not think such excessive consumption in the industrial sector can be changed overnight, the current spending is too much.”

He said even if Kepco’s earnings are reduced, it is necessary to fix “distorted” consumption, stressing that the goal of reforming the billing system is not solely driven by Kepco’s need to improve its earnings.

“Creating an overall roadmap on the electricity billing system has been selected as a national project for next year,” Kim said.