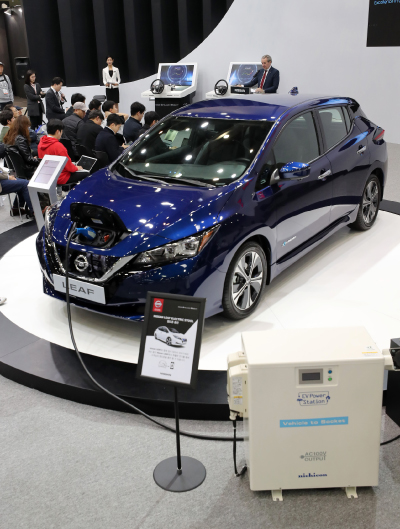 Nissan Korea Thursday introduced an updated version of its Leaf electric vehicle (EV) at the Daegu International Future Auto Expo, hoping to grow its share of the domestic EV market.

The vehicle was released in Japan in September.

Nissan’s local unit started accepting preorders on Thursday, and the model is expected to be on the roads of Korea in the first quarter of next year.

The Leaf is not widely known here as Japan’s Nissan is not strong in the domestic market. The car, however, was the world’s first mass produced electric vehicle when introduced 2010. A total of 370,000 units had been sold globally as of October.

In the latest generation, Leaf comes with advanced performance and smart car technologies, the carmaker said.

This includes the “e-Pedal,” which enables the driver to accelerate and decelerate with the use of a single pedal. The pedal is linked to a regenerative brake, which produces electricity as it slows the car. The feature is often found in new offerings in the EV market.

Nissan Korea also says the latest Leaf allows for 360-degree surround view and is capable of maintaining distance with vehicles ahead.

Performance has been enhanced with a 38 percent increase in horsepower compared to the previous model - now 150 horsepower. Torque is upped by 26 percent.

Despite multiple improvements, the driving range, important to the success of an electric vehicle, is likely to disappoint Korean consumers.

The Kona SUV, from Hyundai Motor, can travel 400 kilometers per charge. GM Korea’s Bolt EV has a 380-kilometer range. The Niro SUV, from Kia Motors, is able to go 380 kilometers on a single charge.

The exact price hasn’t been announced, but the company said at the event the price will be set under 50 million won.