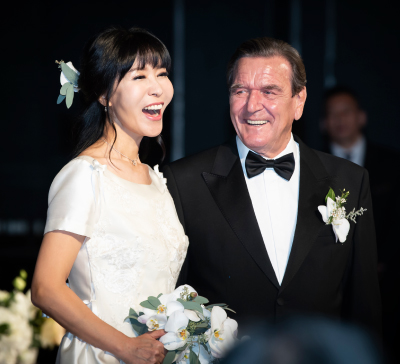 DAEJEON — Having married former German Chancellor Gerhard Schröder in May, Kim So-yeon is having a busy honeymoon period.
A Seoul representative of the Economic Development Agency of the German state of North Rhine-Westphalia, she traveled globally with her husband before marriage and met with international leaders.

The couple joined a reception for the state visit of Russian President Vladimir Putin to Austria. Schröder and Putin are known to be good friends. The Schröders also took part in the Mexico Business Summit in Guadalajara, meeting with Mexican President Enrique Peña Nieto.

“I have had the opportunity to meet with world leaders in joining my husband’s in his travels,” Kim said in a recent interview. “I have experienced things that I otherwise would not have and gathered thoughts on Korea’s situation and its status from the perspective of global leaders.”

The JoongAng Ilbo caught up with Kim, who was representing Germany at the 17th Korea-German Forum on Oct. 25 in Daejeon.
Kim studied German, economics and Japanese at the University of Marburg. She graduated with honors from the Graduate School of Translation and Interpretation at Hankuk University of Foreign Studies and completed a Ph. D course. In addition to being a Seoul representative for the Economic Development Agency of the German state of North Rhine-Westphalia, she is CEO of Eurasia Partners, a consulting firm. She has translated and interpreted for major figures in Korea and Germany.
The following are excerpts from the interview.


Q. Congratulations on your wedding with former German Chancellor Gerhard Schröder. It seems like your marriage has brought Korea and Germany closer.

A. Both countries have a lot in common and have maintained favorable relations. They have no bad history between them. I would be pleased if we could help improve the ties.

Where did you go for honeymoon?

My husband proposed the Maldives, but I proposed East Germany. For me, the more German, the more interesting. The state of Saxony, in particular, has been having hard time due to the recent rise of neo-Nazi extremism. But it was meaningful to find that the region also has great cultural heritage and tradition.

There must have been a lot of Germans who congratulated you on your wedding.

We visited Dresden and Weimar, and I was touched by people who congratulated us. Someone gave us a horse’s hoof, a symbol of fortune, and another stranger paid for our dinner while we were at a restaurant. We accepted everyone’s request for photos, and some people uploaded them to social media.

Will the role of the Korean-German Forum grow larger?

The members of the forum have come from different sectors since it was launched in 2002. We have met every year since to discuss current affairs and made proposals to each country. Now we feel like a family. The forum is a platform that solidifies the ties between experts, creating synergy between the two countries.

[The forum took place in Daejeon between Oct. 24 and Oct. 26, and was co-hosted by the Koreanisch-Deutsche Gesellschaft and the Korea Foundation. At the forum, opinions were exchanged on subjects such as the fourth industrial revolution, digitalization the denuclearization of North Korea and international security. The policy proposals generated at the forum will be delivered to the governments of Korea and Germany.]

Do you plan to retain your post as Seoul representative of the Economic Development Agency of the German state of North Rhine-Westphalia?

The biggest challenge for women in modern society is work-life balance. I have been going back and forth between Hannover and Seoul since the wedding, which means that I remain at engaged in Korean-German exchange. My husband is also taking an interest in what’s happening in my country, his country in-law. Work-life balance and the long commute between Korea and Germany isn’t easy, but I will keep up with the work.

[The agency supports Korean companies — smaller ones, in particular — making forays into Germany. “I take pride in the fact that I am helping both Germany and Korea even though I belong to a certain state of Germany.”]

During the forum, you led a session on the role of smaller companies and their support of the fourth industrial revolution era.

Industrie 4.0, which made headlines during the 2011 Hannover Messe, has already started to innovate manufacturing. The German government developed the concept and launched a strategy devoted to high tech in 2014. The strategy is focused on comprehensive links between digitalization, sustainable economy and energy, labor for innovation, smart transportation and logistics and safety. Basf, for instance, has withdrawn from the chemical fertilizer and dye businesses and entered the secondary battery cell business for electric vehicles.

Does Schröder help you a lot with what you do?

He is a great supporter. He respects what I do, and he sometimes clips newspaper articles on government policies and corporate investment trends to give to me. We talk a lot about business trends and corporate activities. Our conversations help each other.