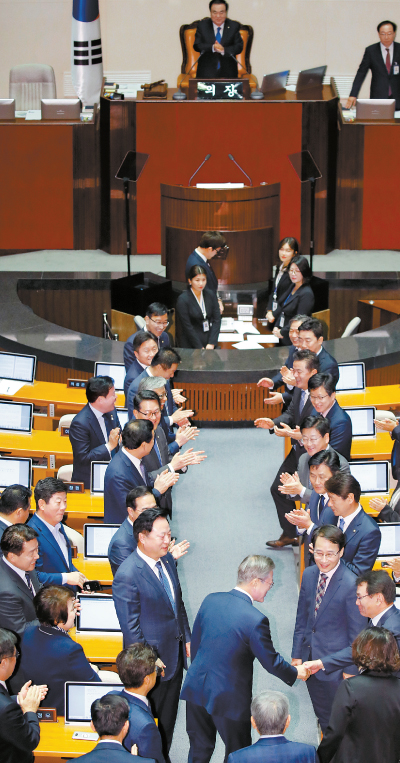 President Moon Jae-in enters the main conference hall of the National Assembly and shakes hands with lawmakers on Thursday before delivering a speech asking for support of a budget bill for next year. [YONHAP]

President Moon Jae-in on Thursday asked the National Assembly to support his peace initiative and help bring South and North Korea closer to unity, using the term “miraculous” twice in a 35-minute speech to lawmakers.

“At a time when the whole world is watching the Korean Peninsula closely, I sincerely request [you lawmakers] that we should respect ourselves more,” said the president in his first National Assembly speech in a year. “I ask that the National Assembly join the efforts by us and the U.S. government in pursuit of the denuclearization of the Korean Peninsula and the peace process.”

Moon was specifically asking for support for the Panmunjom Declaration, the product of his first summit with North Korean leader Kim Jong-un in April, which is still under review by the National Assembly for ratification. Opposition parties, particularly the Liberty Korea Party, have been opposing its ratification, arguing the government did not provide a full cost estimate for a railway and road re-connection project called for in the agreement.

Moon said the government and Assembly must not “miss this opportunity” to improve inter-Korean relations dramatically, emphasizing that achievements came “miraculously” in the fast-evolving diplomacy with North Korea.

“Over the past year, three inter-Korean summits and a historic North-U.S. summit were held,” Moon said. “Through the South-North military agreement, we have completely eliminated the chance of military clash between the two Koreas.”

Moon said South Korean cities bordering the North could be “transformed into areas of inter-Korean exchange and cooperation from areas of danger.” 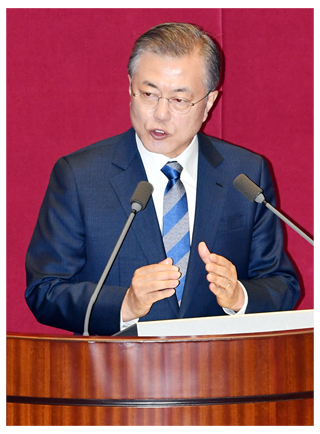 Re-affirming his trust in North Korean leader Kim’s promise to denuclearize, Moon said the two Koreas and the U.S. will “achieve complete denuclearization and a permanent peace regimen based on concrete trust.

“The second North-U.S. summit is just around the corner,” he continued, “and North Korean leader Kim is expected to visit Russia [for a summit] while President Xi Jinping of China is also expected to visit the North soon. The chance for a North Korea-Japan summit is also open. Kim’s reciprocal visit to Seoul will also be realized.”

On an optimistic note, Moon predicted that a “historic starting point toward mutual prosperity of the Korean Peninsula and Northeast Asia is right before our eyes.”

“I ask [the National Assembly] to support our initiative to realize this miraculous opportunity that has come upon us,” he said. He also promised the government’s full support for an inter-Korean parliamentary meeting.

He warned that “threats on the Korean Peninsula will be amplified if we miss this opportunity.”

In his address to 150,000 Pyongyang residents, the first time for a South Korean president to deliver a public speech to North Koreans, he said, “Our people must live together.”

On the economic front, the president made clear his government will stay the course on its economic policy defined by so-called income-led growth, innovative growth and a fair economy, stressing that the country must become one that is “embracing everyone,” a path that Moon described as the “mission of our time.”

Moon acknowledged wealth polarization “was worsening” under his watch and said the government should implement economic policies that “embrace” everyone so that no one falls behind economically.

“In fact, our economic achievement is surprising. This year, our exports will exceed $600 billion for the first time. We are the world’s sixth largest exporter,” he noted.

But despite such impressive figures, he lamented that livelihoods for many were still difficult because the country had been “preoccupied with growth” rather than distribution of wealth.

“We have become a country with the worst economic inequality among developed nations,” he continued.

In an appeal to lawmakers to pass the government’s budget for next year, he explained key points in the spending plan. The government’s 2019 budget is worth 470.5 trillion won ($413.3 billion), a 9.7 percent increase from this year’s, the largest increase since 2009. Moon wants to use government spending to help boost a slowing economy.

“While we achieved three-percent economic growth last year, we are back to the two-percent range this year. And a trend of a low two-percent growth that began many years ago is likely to become permanent [in years to come].”

He then went on to list negative external factors such as trade protectionism, trade disputes and interest rate increases in the U.S. that could affect the Korean economy next year.

Specifically, the government earmarked 23.5 trillion won for a jobs-related budget next year, a 22 percent hike from this year’s with a focus on creating jobs for the young, women, people with disabilities and those in the baby-boomer generation.

To speed up innovative growth, one of the three major pillars of his economic agenda, Moon said the government earmarked 5.1 trillion won to invest in eight leading areas of innovation including autonomous vehicles, drones, fintech and smart industrial complexes.