Seoul, Washington give assurances on Opcon

Seoul, Washington give assurances on Opcon 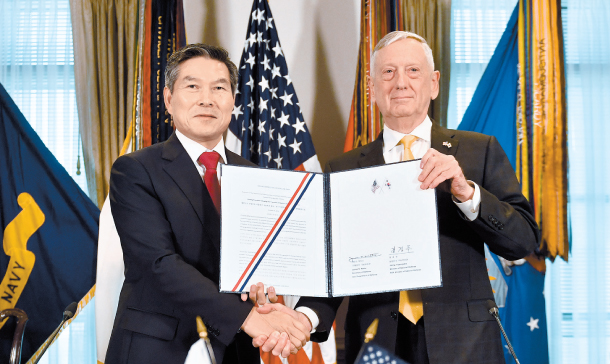 Seoul and Washington signed a strategic guideline on Wednesday that paves the way for a Korean-led combined defense mechanism after the transfer of wartime operational control (Opcon) from the United States.

The mutual guideline guarantees the continued stationing of U.S. troops in Korea and the retaining of the Combined Forces Command (CFC) and the United Nations Command after the transfer of Opcon from Washington to Seoul. It places a four-star Korean general as the head of the future CFC, with a U.S. general serving as deputy commander.

Washington further committed to a continued extension to Korea of its nuclear, conventional and missile defense deterrence capacities even after the transfer. This should quell some concerns in Seoul that the transfer of Opcon could lead to the withdrawal of some 28,500 U.S. troops stationed in Korea or the pulling back of American extended deterrence over the peninsula.

The two sides will work toward an initial operational capability (IOC) certification of a Korea-led combined defense posture next year. However, the specific timing of the Opcon transition will be determined later.

They also reviewed preparations to relocate the CFC headquarters to Seoul’s Ministry of National Defense compound following the transfer of Opcon.

The U.S.-led UN Command assumed operational control of the South’s military during the 1950-53 Korean War. The CFC was established in 1978, taking over control from the UN Command. South Korean assumed peacetime operational control of its forces in 1994. The two sides agreed in 2007 to return wartime control by 2012, but there were several postponements because of various circumstances including military tensions with the North.

President Moon Jae-in has said that he would like wartime operational control to be transferred within his five-year term, which ends in May 2022. “In signing this document, we ensure continuity for the future Korean-led Combined Forces Command as it assumes the mission of our current U.S.-led Combined Forces Command,” Mattis said after the meeting.

He said this future command “will continue to use the combined might of the U.S.-ROK alliance,” to defend the Republic of Korea’s sovereignty “from any external aggression.” He added, “We also reaffirm the continued presence of U.S. troops stationed on the Korean Peninsula.”

Jeong said, “This year’s SCM has greater importance and significance than any other meeting, not just due to the fact that it’s the 50th of its kind, but also because it comes at a time in which we embark on an audacious journey toward denuclearization and establishment of permanent peace on the Korean Peninsula.”

Both defense chiefs advocated a diplomatic approach to denuclearization, and Mattis said, “We look forward to seeing continued concrete progress as our diplomats work to resolve this more than half-century-long conflict.” Mattis also expressed public support for an inter-Korean military pact for the first time in a press conference, amid reports of friction between Seoul and Washington over the agreement.

The pact, signed on Sept. 19 during the inter-Korean summit in Pyongyang, aims at reducing border tensions by disarming the Joint Security Area (JSA) and creating a maritime buffer zone around Northern Limit Line (NLL), in keeping with the inter-Korean Panmunjom Declaration of April 27.

Seoul and Washington released a joint communique after the SCM that called to “strengthen coordination and cooperation towards the common objective of complete denuclearization in a final, fully verified manner and establishment of permanent peace on the Korean Peninsula.”

The two defense chiefs recognized the “constructive commitments” made in the three inter-Korean summits and first North-U.S. summit this year and “noted the steps” taken by Pyongyang. But they also highlighted that “full implementation of all UN Security Council resolutions would continue until we are confident about North Korea’s complete denuclearization.”

They also noted that military-related areas of the Panmunjom Declaration should be implemented in a way that contributes to easing tension “while ensuring combined readiness and committed to continue to maintain close coordination and cooperation between U.S. and ROK defense authorities during the process of implementation.”

Jeong expressed expectations that creating a buffer zone by the Northern Limit Line in the West Sea, as agreed during the inter-Korean summit in Pyongyang, “would contribute to fundamentally preventing unplanned encounters.”

Mattis, in turn, was said to have “shared his understanding that the military confidence building measures are important for establishing peace on the Korean Peninsula.”

The two defense chiefs also made the final decision to suspend Vigilant Ace, a large-scale joint aerial exercise scheduled for December. Seoul and Washington have canceled several major military exercises in keeping with the spirit of ongoing denuclearization negotiations with Pyongyang.

Seoul and Washington will further decide whether to suspend next year’s joint large-scale military exercises by Dec. 1, Jeong told reporters in Washington.

Mattis likewise brushed off concerns of a weakened military readiness posture, noting that other joint exercises are still being carried out.