Two international taekwondo bodies on Friday agreed to establish a joint organization aimed at integrating after holding talks in Pyongyang. 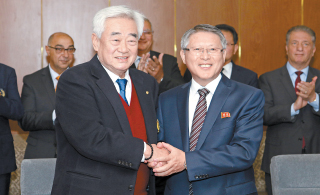 The 49-member WT delegation, including the all-South Korean taekwondo demonstration team, has been staying in the North Korean capital since Tuesday after an invitation from the ITF.

The two sides added that the name of the joint organization and its goals will be confirmed later following their meeting in December.

Like the divided Koreas, taekwondo shares the same roots but is now separated by the WT and ITF styles of taekwondo. The WT, headquartered in Seoul, is currently the official international taekwondo governing body as recognized by the International Olympic Committee (IOC). The ITF has a different set of rules than the WT.

“There’s one taekwondo, and we’re one people, so things can’t go wrong,” Ri said to Choue during the meeting. “We’ll do our best to make this agreement be fully carried out after signing.”

To facilitate their integration efforts, the two taekwondo bodies also decided to conduct joint activities in various international events, including the 2020 Tokyo Olympics.

Choue said the two sides plan to have joint taekwondo demonstration performances in cities like Lausanne, Switzerland, where the IOC headquarters is located, as well as Paris, the host city for the 2024 Olympics, and Rome.

“I’ve had a thought that taekwondo should play a bigger role,” he said. “Taekwondo was designated as an Olympic sport at the IOC session in Paris in 1994, and next year marks the 25th anniversary of that, so I was thinking about having joint performances to commemorate that moment.”