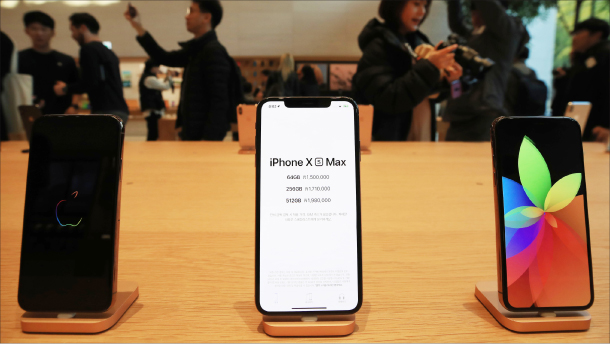 After a week of presales, Apple’s new series of iPhones officially rolled out in the Korean market Friday.

The response for the three phones - iPhone XS, XS Max, and the budget XR model - has been good.

According to local mobile carriers, the trio attracted the same number of or slightly more preorders than the previous iPhone generation: the iPhone X and the iPhone 8.

“Overall, the new phones are generating more interest than the previous series,” a spokesperson from KT said. “Though the iPhone XS is getting more attention than the XR.”

The most popular color option was gold for iPhone XS and XS Max, followed by space gray and silver. For iPhone XR, black and white models led.

The new phones are big with the young. About 30 percent of the early buyers were women in their 20s, according to SK Telecom. People in their 20s including men accounted for half of all customers making early reservations for the iPhones.

As for storage, the 256 gigabyte (GB) option was the most popular for both iPhone XS and iPhone XS Max. Considering users have to pay over 1.8 million won (＄1,611) for the 512GB option, many customers favored the slightly less pricey option. For iPhone XR, the mid-priced 128GB option was more popular than units with 64GB or 256GB of storage.

It will take time to judge the true demand for the new phones from Apple, and questions are being raised as to whether the brand is up against the limits of efficiency gains and losing momentum.

Apple posted ＄14.1 billion in net profit in the third quarter, up 32 percent year on year. Investors focused on weak unit sales and weaker-than-expected revenue guidance for the fourth quarter. Apple said it sold 46.89 million iPhones in the third quarter, a mere 0.4 percent increase year on year and below analyst expectations of 47.5 million unit sales. The revenue increase came from higher pricing.

The U.S. phone maker also announced that starting next year it will not be reporting a breakdown of sales by product line. Luca Maestri, chief financial officer at Apple, said in a conference call Thursday that unit sales are no longer a good measure of the company’s performance.

Apple stock fell by as much as 7.4 percent in aftermarket trading.