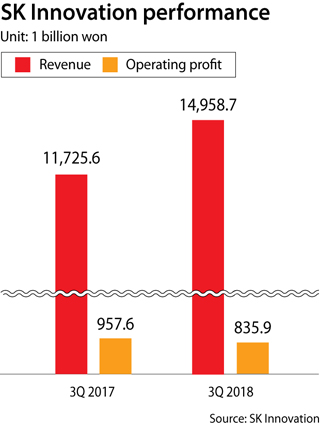 “Despite an expanded margin on paraxylene (PX) sales, a drifting crude oil price lead to a decrease in inventory-related profits,” said the company in a written statement.

SK Innovation said it was able to pull off above-market-consensus earnings due to its diversified non-refinery business.

Profit generated by the non-refinery business accounted for 66 percent of SK Innovation’s operating profit in the third quarter.

“SK Innovation is pursuing deep change to minimize the impact from external factors such as oil price and exchange rates,” the company said.

SK’s chemical business was able to post 345 billion won in operating profit, an increase of 107.8 billion won compared to the previous quarter.

The slow lubricant market didn’t help sales, but the increase in high value-added products lead SK Innovation to generate 132 billion won from its lubricant business, which is 5.9 billion won more than the previous quarter. It was still 12.1 billion won less than the same period last year.

“The electric vehicle battery industry is expected to grow at an average of 50 percent annually until 2025,” the company said during the conference call Friday. “One-time orders of batteries also expanded by five to 10 times compared to the past.”