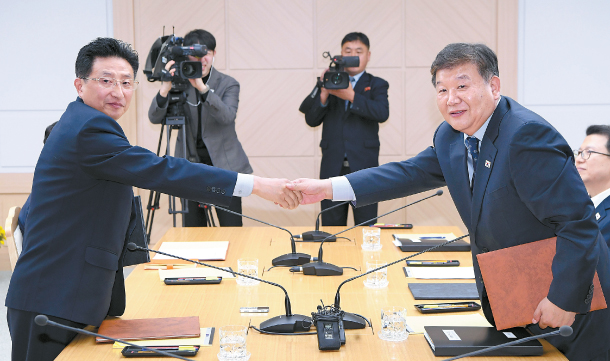 South and North Korea will submit a joint bid to co-host the 2032 Summer Olympic Games to the International Olympic Committee, officials from both countries agreed in a meeting on Friday.

The agreement was reached at the latest inter-Korean meeting held at the Kaesong joint liaison office just north of the border.

It was another follow-up to the Pyongyang Declaration signed by South Korean President Moon Jae-in and North Korean leader Kim Jong-un on Sept. 19.

In Friday’s sports meeting, both Koreas also agreed to form combined teams for the 2020 Tokyo Summer Olympics and other international competitions. Working-level discussions on unified teams will begin with the 2019 IHF World Men’s Handball Championship, set to kick off in Denmark and Germany next January.

Both Koreas also agreed to “actively participate” in whatever international competition is held in each other’s country as well as hold friendly matches. They agreed to discuss working-level matters pertaining to those issues at the Kaesong liaison office.

According to Seoul’s Unification Ministry, the North faxed a document Tuesday that suggested both countries hold a sports meeting on Friday. The South was represented by a delegation led by Second Vice Sports Minister Roh Tae-kang. North Korea’s team was led by Pyongyang’s Vice Minister of Physical Culture and Sports Won Kil-u.

A separate meeting between the co-heads of the Kaesong joint liaison office was also held Friday morning, according to the Unification Ministry. In a statement, the ministry said both sides “broadly discussed a variety of current issues between the South and North,” and “reaffirmed” their intent to implement the Pyongyang Declaration.

His North Korean counterpart is Jon Jong-su, vice chairman of the Committee for the Peaceful Reunification of the Country of the DPRK. It was the first time since Sept. 28 they met, though both Koreas initially agreed to hold a Chun-Jon meeting every week when the office opened on Sept. 14.

The ministry explained that it was the first time since May 2008 that they shared information on such a matter.

It added that the resumption was a follow-up to a military agreement both Koreas signed on Sept. 19 during the third inter-Korean summit. The measure will hopefully prevent any clashes near the Northern Limit Line, the ministry said.

The two Koreas as of Thursday ceased all hostile acts against each other along the border, in land, sea and air, in accordance with their military pact.