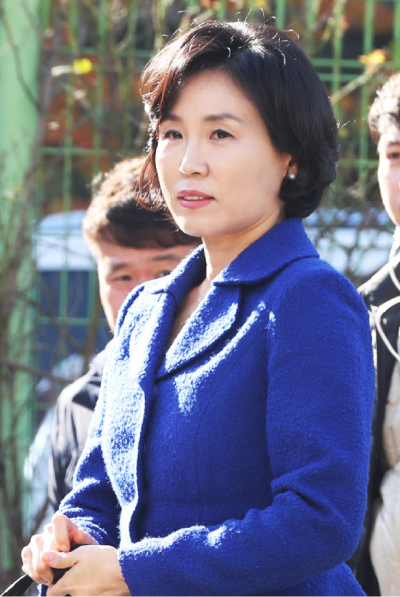 Gyeonggi Gov. Lee Jae-myung’s wife was questioned by police on Friday over allegations she used a Twitter account to defame President Moon Jae-in.

Just a day before, police asked prosecutors to indict the governor on multiple charges, including abuse of power.

Lee’s wife, Kim Hye-kyung, has been accused of being the owner of a Twitter account that spread malicious information attacking Rep. Jeon Hae-cheol and President Moon Jae-in, who were Lee’s rivals during the Democratic Party primary for the Gyeonggi gubernatorial race in June and last year’s presidential election, respectively. Kim denies that she ran the account. She responded to reporters’ questions with a short apology before stepping into the headquarters of the Gyeonggi Nambu Provincial Police Agency Friday morning.

The governor himself underwent questioning by police on Tuesday on a total of seven accusations. They included forcibly admitting his brother into a mental institution, spreading false information about an actress who alleges they had an extramarital affair, and affiliating with organized crime while he was mayor of Seongnam from 2010 to 2018.

Police decided on Thursday to indict Lee for spreading false information during a publicly televised debate between candidates running for Gyeonggi governor ahead of the June 13 local elections. He denied abusing his power as Seongnam mayor to force his brother into a mental hospital and falsifying a prosecutor’s testimony on a TV program in 2002.

Police said that Lee ignored a law stating that all patients hospitalized on executive orders must first be evaluated by a professional psychiatrist. As Seongnam mayor, he repeatedly asked a subordinate to carry out the forced admission, and relocated the employee to a different position when he protested.

Police also said that Lee’s denial that he falsified testimony was a lie, since the Supreme Court in 2003 found Lee guilty of the crime of impersonating a public official and fined him 1.5 million won ($1,340).

According to election laws, spreading false information is punishable by a jail sentence of 5 years or a 30 million won ($27,000) fine. If found guilty, Lee would also be removed from his position as Gyeonggi governor.

Police, however, cleared Lee of the other allegations he faced, including a lurid accusation that he publicly lied about an affair with actress Kim Boo-sun and smeared her. Allegations that Lee had ties to organized crime and accepted donations from criminals during his time as Seongnam mayor also lacked evidence, police said.

It is now up to prosecutors to look into Lee’s case and indict him if necessary. The governor would have to be charged before December, as the statute of limitations for election law expires in six months.

Lee rebutted the police’s decision with fierce indignation on Friday. He called the investigation “excessive and contrived” on his Facebook page.

The governor claimed the probe was rife with misconduct such as intimidating witnesses, falsifying warrants and publicly shaming him. Lee added that he would be found innocent by prosecutors once they undertook a legally appropriate investigation.