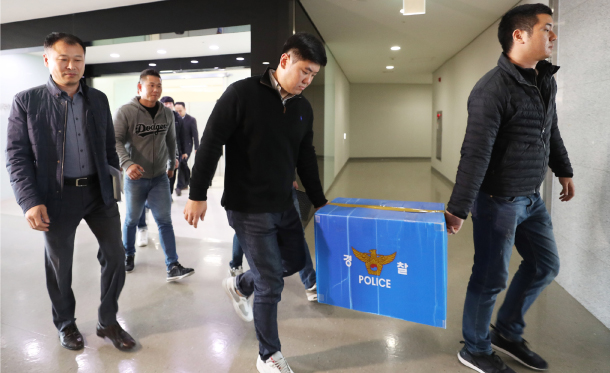 Days before, footage surfaced of the businessman physically abusing an employee and engaging in bizarre, cruel acts towards chickens.

Yang Jin-ho, the chairman of Korea Future Technology, became the subject of public outcry after investigative journalists on Tuesday exposed footage of his abuse. The police believe he has accumulated a fortune from the distribution of pornography through the popular online file sharing systems Wedisk and Filenori, which he effectively owns.

On Friday, the Gyeonggi Nambu Provincial Police Agency raided ten different places tied to Yang, including his home, the Wedisk office in Seongnam, Gyeonggi, as well as the office of Korea Future Technology in Gunpo. Police also said they were in possession of Yang’s personal mobile phone.

According to Newstapa, a media outlet run by the Korea Center for Investigative Journalism, which divulged the footage, Yang had made 40 billion won ($35.6 million) in profit off the two websites from 2015 to 2017. This information surfaced through Newstapa’s follow-up report from Thursday. It also alleged that Yang had spent this fortune on luxuries like multiple Lamborghini cars, which cost hundreds of millions of won each.

Yang currently runs a robot company called Korea Future Technology. It unveiled a bipedal walking robot called Method 2 that grabbed headlines in 2016. In Newstapa’s report, however, a former Wedisk employee alleged that the robot was barely functional and amounted to little more than a hobby project for Yang that cost around 20 billion won to develop.

The footage showed Yang beating and spewing profanities at a male former worker and making his employees kill chickens with a bow and arrow and decapitate them with a Japanese sword.

With these new revelations, Yang now faces a total of seven allegations in addition to the pornography distribution charges, including workplace violence and abuse of animals. On Wednesday, the local newspaper Hankyoreh reported that Yang is under investigation by the Suwon District Prosecutors’ Office for the additional allegation that he beat up a professor based on suspicions that the man was having intimate relations with his wife.

The Gyeonggi police said its investigation into Yang for distributing pornography is now in its final stages. They already raided his home and Wedisk and Filenori’s offices once before, in last September. Yang is expected to be summoned for questioning sometime next week once police complete an analysis of the material collected from the raid.

The Ministry of Employment and Labor on Friday also launched inspections into the multiple companies Yang owns to investigate the extent to which the executive violated labor laws through his abuse of employees.